Big D And The Kids Table “Fluent In Stroll” 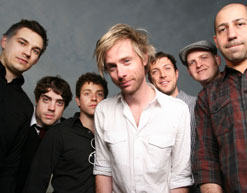 Hello, everybody, it’s Andy Gesner from HIP Video Promo, and today it’s our pleasure to bring the party to you. How many artists are sufficiently adventurous — or sufficiently exuberant — to invent their own genre? A tall order for sure, and one that requires imaginative exertion, but that’s exactly what Big D and The Kids Table have accomplished on their latest release. They call it “stroll”, and in practice, it’s a brilliant fusion of pop-punk, rockabilly, dub, Stax-Volt soul, reggae, Forties jazz, and the third-wave ska that has made the band a fixture of the festival circuit and the Warped Tour. Fluent In Stroll is the most ambitious entry in the group’s catalog, and their most successful realization of their sound and approach. On Fluent In Stroll, they draw connections between eras, they demonstrate their appreciation for and knowledge of music history, and they display their mastery of different styles; best yet, they’re having fun with it all, and that enjoyment is contagious. It’s entirely conceivable that Big D and The Kids Table have started a movement here, and that others will make stroll records of their own; even if that doesn’t happen, Big D will have conducted a cultural experiment worth remembering.

And lest you think they’re being cavalier about their musical roots, rest assured that Big D and the Kids Table act with the imprimatur of ska-punk and ska-pop royalty. They’ve toured with the English Beat and played the Ska Summit in Las Vegas. Big D and the Kids Table were featured performers on the Ska is Dead and You’re Next tour, and they’ve covered The Specials to great acclaim among fans of traditional 2-tone. Jim “the Bass Fiddleman” Gittleman of The Mighty Mighty Bosstones produced Fluent In Stroll as only a ska-punk veteran could, giving prominent roles to the horn players, emphasizing the bottom end, and making sure that the shindig never stops. New elements are perfectly harmonized with the recognizable; this is recognizably a Big D record, sure to please old fans even as it opens up new opportunities for the band.

One (or should we say four?) of those new elements comes in a particularly lovely package: the Doped Up Dollies, a group of winsome backing vocalists with attitude to burn. They’re featured all over Fluent In Stroll, cooing, bopping, chiding, and carrying on a musical and lyrical dialogue with bandleader David “Big D” McWane. The four lovely Dollies get plenty of screen-time in the explosive clip for “Fluent In Stroll”, and they make the most of it — flirting outrageously with the camera, and imparting wild sex appeal to almost every shot. McWane’s performance is exciting, too: he shouts out every line with the enthusiasm of an ardent partygoer. All the motion in the clip is toward the camera; Big D and the Kids Table are coming at you with everything they’ve got, inviting the viewer to sing and dance along. It’s an appropriately kinetic video for a band that has been touring nonstop for the better part of the decade, and who will continue to bring the heat wherever they go!

We’re psyched to have the opportunity to work with the good folks in the SideOneDummy camp to bring you this smoking clip. If you need more info, call Andy Gesner at 732-613-1779 or e-mail us at info@HIPVideoPromo.com. You can also visitwww.SideOneDummy.com  to find out more about Big D and the Kids Table.