Big D And The Kids Table “We Can Live Anywhere” 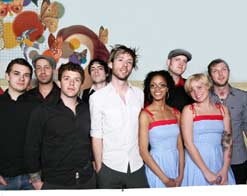 Greetings, everybody, it’s Andy Gesner from HIP Video Promo, here to share a beautifully-shot clip from a group of musicians who always know how to present themselves. Big D and the Kids Table’s shows are part celebration, part pageant, and part all-night shindig; the band has become renowned (and rightly so) for their remarkable live energy. Yet the group’s latest video is warmly domestic — the “We Can Live Anywhere” clip catches lead singer Dave McWane cheering up a girlfriend with promises of a new life together. Oh, there’s plenty of footage of Big D and the Kids Table in action, and it’s every bit as joyous and kinetic as the group’s concerts. But this time around, they’re not rocking a club; instead, they play in a warehouse loft that could be home to a big-hearted artist. The appealing McWane could be that artist – he certainly plays the part of the generous boyfriend convincingly.

The engaging clip for “We Can Live Anywhere” is an accurate reflection of Fluent In Stroll, the band’s imaginative and often-gorgeous new set. Billed as a fresh direction for Big D and the Kids Table, it’s really the culmination of everything they’ve been working toward for the past decade: an instantly-winning amalgam of thirdwave ska, old-school R&B, contemporary pop, Sixties soul, and plainspoken American folk-rock. It’s decorated by horns, organ, and spicy female backing vocals (courtesy of the Doped-Up Dollies), driven by the band’s supple rhythm section, and enlivened by McWane’s deep understanding of musical history and world traditions. The frontman calls his new style “stroll”, and it’s a hit — Fluent In Stroll has become the group’s most successful album yet, reaching number 22 on the Billboard Heatseekers chart. Long heralded for their showstopping performances on the Vans Warped Tour, ‘09 brought Big D and the Kids Table a special honor: the song “Fluent In Stroll” was chosen as the finale track on the tour’s official compilation album.

“We Can Live Anywhere” is a typically-plainspoken message from McWane to the object his affection: if she’s discontent with her life where they’re living, he’s more than willing to pull up roots and relocate. As long as the couple can stay together, moving doesn’t have to be complicated or traumatic. In the video for “We Can Live Anywhere”, the girlfriend does have a concrete reason for wanting to get out of town, and it’s one that plenty of Americans can sympathize with. She’s been laid off of her office job, and forced into the indignity of carrying the personal contents of her desk through the village green in a cardboard box. She’s blue, and who could blame her? But McWane is a charmer, and he immediately sets about cheering her up – romantic dinners, trips to the local café, and, most importantly, a promise of a brand new life. In one sequence, McWane presents his girl with a map of the world, rolled up and festooned with a bow, and a handful of darts. One finds a target – and in the very next scene, they’re on a prop plane together, ready for whatever comes next.

It’s a big pleasure for us to be working with the entire Side One Dummy crew to bring you another stellar clip from Fluent In Stroll. If you need more info, call Andy Gesner at 732-613-1779 or e-mail us at info@HIPVideoPromo.com. You can also visitwww.SideOneDummy.com to find out more about Big D and the Kids Table.

For info about Big D and the Kids Table’s previous video, “Fluent In Stroll” click HERE