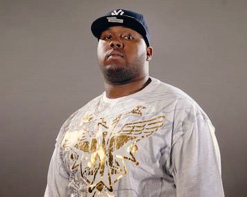 Greetings programmers! It’s Andy Gesner and the HIP crew here with a New Jersey hip hop artist who not only stands out from the state competition, but has got the lyrical flow and music chops to take his craft to a national level. Big Worm (aka Fat Synatra) is a prime and shining example of what independent hip hop artists should strive for – class, elegance, superb delivery, and a fresh approach. Big Worm offers up all the goods and then some on his brand new single “Big Boy Dance.”

Big Worm (born David Williams Jr.) is not your typical East Coast hip hop artist. At first sight of his intimidating 6 ft. 300 lb frame, people automatically prepare themselves to hear a drug dealing, gangster rapper. Yet, Big Worm is an MC that treasures wit and flow over now-expected and even somewhat cheesy pouts and threats many rappers implore. Worm separates himself from the pack with clever lyrics, catchy delivery, and outstanding production value. After all, Big Worm is a college graduate who aims to prove to the world brains and brawn is a much deadlier combination than brawn as a standalone.

Big Worm has been generating serious seismic activity in the recent years, making quite the name for himself in the scene. The release of his recent mixtape I Got Dat Product hosted by DJ Ophax (2008 Justo Mixtape Award Nominee for Best International DJ), earned Big Worm a lot of attention and a massive fan base not only in his region, but also overseas. Worm is now taking the country by storm with his heavyweight anthem “Big Boy Dance,” which already has him performing in various cities and states like West Virginia, Ohio, Baltimore, New York City, Philadelphia, and of course his home state of New Jersey. He even has representation in the People’s Republic of China via PMG China, which is a top notch booking agency that is bringing Big Worm over this summer for several performances. This is no small deal for this big country, they’ve been heavily promoting with a heavy promotional campaign that involves CDs, posters, and more announcing his arrival.

Worm has also linked up with many mixtape DJs, in doing so has had many songs and freestyles placed on numerous mixtapes in analog and internet. After performing in a Budweiser’s Battle For The Crown competition sponsored by Anheuser-Busch in the summer of 2009, Worm beat out 10 other hand selected acts in the city of Philadelphia to go on to open up for major recording artist such as, Nas, Damien Marley, Busta Rhymes, The Roots, Common, Big Boi (Outkast), and many others at the annually Rock The Bells Concert Festival in Washington D.C. After hearing Worm, Phrequency raves that “he showed that not only can he battle rap, but he knows how to make concept music.”

In just several days of posting his independently released music video on YouTube, Big Worm has already achieved over a thousand views, and rapidly rising. This should come as no surprise after hearing the standout track. The song is not only upbeat and absolutely radio ready, but features none of the cheesy auto-tune clichés of his contemporaries, nor does it claim any outlandish and totally unbelievable facts. The track is filled with clever hooks about Big Worm’s thundering stature, hard-earned accomplishments, and easily influences the listener to join him in the “Big Boy Dance.” His flow is sharp, smooth and rapid, something that will instantly radiate with every second of your first play-through. The clip keeps up with Big Worm’s attitude as he competes for a girl’s affection, besting his competition in physical presence and style. The video never oversteps the boundaries of humor, realism, and gravity. With everything in just the right amounts, Big Worm has refined his swagger to inspiring perfection.

It is extremely rare that a rising hip hop artist can have his formula so finely refined and ready to compete in the pro ring. Big Worm has calculated his strengths and uses them to his advantage. We are certain that his new video for “Big Boy Dance” will resonate with many fans of the genre, as well as viewers who will unexpectedly find themselves attuned to clip. We’ve got lots of Big Worm giveaway stuff here at the office, so be sure to reach out! If you need more info, call Andy Gesner at 732-613-1779 or e-mail us at info@HIPVideoPromo.com. You can also visit iTunes to find out more about Big Worm.