Bill Carter “Anything Made Of Paper” 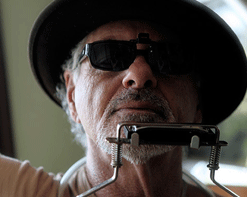 Bill Carter’s “Anything Made of Paper” uses a collage of different animation techniques to tell a story of injustice, hope, and love inspired by the tragedy surrounding the West Memphis Three.

The song was written as a present for Damien Echols when he was on death row. Bill and his wife Ruth set out to write a song about love and tragedy. The animated music video is a fictional re-telling of the story that inspired Bill to write the song in the first place, and echoes the hope we all must cling to in the face of injustice.

Directors Pat Kondelis and Brandon Ray experimented with the blending of several different paper-based forms of animation to tell the story. “We wanted to the see wrinkles in the paper, the tape, the folds, the edges, anything that reminds the viewer that actual paper is being used,” says Ray.

Bill Carter has been a pillar of the music scene for nearly three decades, along with songwriting partner Ruth Ellsworth. Over 200 artists have found gold in the songwriting genius of this Texas Troubadour, including Stevie Ray Vaughan, The Fabulous Thunderbirds, Robert Palmer, The Counting Crows, Storyville, Omar and The Howlers, The Brian Setzer Orchestra, Ruth Brown, John Anderson, and Waylon Jennings.

Carter’s “Anything Made of Paper” has already touched the hearts of many. He performed it in August 2010 at the Voices for Justice Concert and Rally in Little Rock, AR in support of the West Memphis Three, and was accompanied by Johnny Depp to play the song on the Late Show with David Letterman earlier this year.

The animated video for “Anything Made of Paper” from the album Unknown is a penetratingly unique concept, that utilizes multiple animating methods to create an original piece of art that grabs you from the first frame. Damien Echols and his wife Lorri were instantly moved by this video, saying “We love this video. When we watched it for the first time, we both laughed and marveled at the sweetness, and the beauty of it. What talent and care went into its creation. So happy it’s out there to accompany this, our beloved song.”

Bill Carter states that “Brandon and Pat’s original concept for a video of this song is a penetrating magical work of art … the transposition is flawless” and his wife Ruth was equally effusive in her praise, saying “This song for two hearts has found its way into many. Thank you brandon and pat for this unique and beautiful interpretation.”

You can contact Andy Gesner and the HIP Video Promo crew at (732)-613-1779 or email us at info@HIPVideoPromo.com. You can also visit www.BillCarterAndTheBlame.com/.