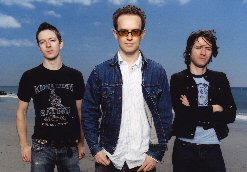 Hello everybody! It’s Andy Gesner and the staff from HIP Video Promo checking in with another excellent video. We’re thrilled to be working with Sam Bisbee, an artist who epitomizes the New York City independent aesthetic. Even if you don’t yet know this artist, we’re still sure you’re going to love “You Are Here”, the first video and single from High,his latest album. Sam Bisbee is poised to be the next major figure to skyrocket out of the New York club scene – the buzz surrounding his upcoming showcase performance at the prestigious Bowery Ballroom on Thursday, July 1st is resounding! Clearly, this is an act on the rise.

Bisbee has paid his dues. He’s a familiar figure on the NYC club circuit, and has been playing in popular local bands for more than a decade. High is just the latest entry in a ten year public diary of ruminations, personal statements, and inspiring declarations. That said, it’s also his most mature and engrossing work: the one that best captures his synthesis of modern singer-songwriter music and classic urban voices like Lou Reed, Tom Verlaine, and The Feelies. Like those of his models, his melodies are always immediate, and invariably catchy.

“You Are Here” epitomizes the Bisbee approach to writing. He leads with a chorus that’s broad, gently philosophical, amusing, reflective, before diving into wordy verses rich with imagery and specific associations. Always the wry observer, Bisbee comments on the strange alienation of close quarters: “I like to count the people across the street/In their apartments watching TVs”, he sings, in his cracked, conversational, and instantly winning voice. “Sometimes the screens are exactly the same/We’re all staring at the same thing ten feet away.” The lyrics are rife with similar images of people at great distance sharing the same moment while remaining mutually unaware of the fact: a little girl watching an airplane fly overhead and a flight attendant on the same airplane, or an FM radio DJ and a solitary listener.

You’d expect the video for “You Are Here” to reflect some of Bisbee’s cleverness, and indeed it does. The clip opens with a shot of a blank, wooden tabletop – empty except for six cents in change and a half of a stick of Doublemint gum. The camera stays in a fixed position above the tabletop throughout the video, as do the other items. On even sixteenth notes – roughly twice per second – a new snapshot is placed, face up, on the table. The photographs are laid in a stack, each new one completely covering the last, forming a visual essay, a commentary, and a running narrative.

The photos are arranged in a series. Periodically, a hand reaches from off-camera into the frame – it removes the stacks, shuffles the order, forces the images to run backwards. In so doing, the video becomes a virtual flip-book: a pixilation, a manual document of stop-action motion. Like the people watching their TV sets, disconnected from each other yet engaged in similar activity, the images are discrete and solitary. Yet in combination, these frozen moments become fluid; they take on a life, they become a story. Bisbee relates the formal structure of his clip to the message of the song: we’re all somewhere, discrete, isolated. But just like freeze-frame clips on a strip of celluloid, or stop-action images on videotape, by virtue of proximity and similarity, we’re together. The isolation imposed by physical distance is overcome in the end by the connection through shared experience of the same instant in time.

Surprisingly, the “You Are Here” clip was shot without any digital alteration of the images. Director Tobias Perse shot thousands of photographs, arranged the snapshots in sequence, and assembled the video image by image. And Bisbee’s got the contact sheets to prove it: they’re posted for the curious on www.sambisbee.com.

We are, as always, excited to be able to help you get to know another new artist who’s been lurking just beneath your radar, but is worthy of your attention. We’re well supplied with copies of Sam Bisbee’s CD High for giveaways. As always, if you need more info call Andy Gesner at 732-613-1779, or email info@HIPVideoPromo.com.