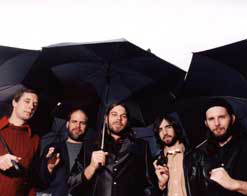 Greetings to all of my esteemed music video programmer friends! It’s Andy Gesner and the staff from HIP Video Promo, here with another terrific video from a beloved band on the brink of a national breakthrough. If you already know and love The Black Heart Procession, “Not Just Words” will feel like the culmination of a ten-year journey through the darkest and most mysterious thickets of the sonic underground. If you’re new to the band’s music, this is a great place to start engaging with the project: “Not Just Words” will simply sound like a perfect basement-pop recording. Emotional, often pained, and as intense and breathtaking as a watercolor, The Black Heart Procession’s music is not often considered sunny – but the lead single from the forthcoming The Spell sounds to our ears like a legitimate summertime hit.

Fans of the San Diego quintet have learned to expect intrigue, drama, and impressionistic soundscapes. The band’s early recordings felt like cohesive compositions assembled from the scraps and fragments of other recordings: organ washes, muted beats, strange, undefinable noises. 2, their second album and first for Touch & Go Records, was a stunning hallucination: folk-rock streaked with samples, synthetics, and alien-sounding piano. One constant has been the gigantic presence of singer and songwriter Pall Jenkins: huge, warm, sometimes weary, and frequently aching, his heavy voice shapes and directs this spectral music.

The Spell doesn’t clean up the mystery or even burn off much of the intoxicating haze – but it does bring The Black Heart Procession’s excellent songwriting into sharper focus. Jenkins’s long-time collaborator Tobias Nathaniel is in peak form here, setting his radiant acoustic and pedal-steel guitar against beds of suggestive, gently-struck piano. The rhythm section, borrowed here from The Album Leaf (a band that Jenkins has collaborated with) prove themselves adept at both gently assisting the atmospherics and stomping along with the guitarists’ monstrous riffs. “Not Just Words”, a mid-tempo rocker, manages to sound simultaneously otherworldly and firmly terrestrial.

The hypnotically-shot clip for “Not Just Words” finds the band performing in an idyllic countryside setting. Jenkins sings in front of mountains, trees, and wide blue skies – and, occasionally, text suspended in the air behind him. The big black letters stand like an interruption in the fabric of reality, and call attention to the strange artificiality of the scene. This is a natural paradise, but there’s also something unearthly about it, and the dream might be shattered at any point by messages from above. Reinforcing the sense of alienation is a dancer (actress Shannyn Sossamon) who moves to the music but also, oddly, against it. She appears at first as if she’s sharing the frame with the band – but then her size changes radically. In some shots, she’s as tall as Jenkins; in others, her head dwarfs the mountains in the background. She’s an illusion and a kind of spirit; at once part of the landscape and the surest sign that the landscape itself is phantasmal.

Here at HIP we are super stoked to be working with Sara Tolbert and all of our friends at Touch and Go Records to being you this incredible clip! The Black Heart Procession is currently on tour in Europe, but will be doing a full nationwide tour, and it would be our greatest pleasure to set up video interviews and IDs for you when they come thorough your market! We also have plenty of copies of The Spell, so please don’t hesitate to get in touch if you would like to set up on-air giveaways. If you need more info, call Andy Gesner at 732-613-1779 or e-mail us at info@HIPVideoPromo.com. You can also visit www.TGRec.com or their facebook to find out more about The Black Heart Procession.