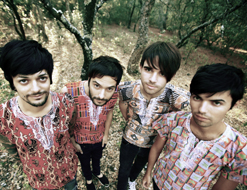 Hey, everybody, it’s Andy Gesner and the crew from HIP Video Promo, here with a sensational new clip from a dynamic band with true global appeal. In 2009, a young European group with a propulsive, infectious, thoroughly-danceable sound took America by storm. The lyrics were cryptic (but romantic), the synthesizers were bright and colorful, and the guitars shimmered. This was music at the intersection of sound, style, fashion, and international design, and once it reached these shores, it was unstoppable. We’re talking about Phoenix, of course, but next year at this time, we might be saying all the same things about Blasfemea. These four talented Portuguese musicians are the darlings of the Lisbon pop underground; flush with success on the far side of the Atlantic, they’re ready to make their mark in the United States.

Consider “Maria”, their latest single from the new album Galaxia Tropicalia. It’s a swirl of oscillating synth, angular guitar, irresistible beats, pop sweetness and punk attitude — it’s a welcome blast of heat from sunny Portugal. Like all the tracks on Blasfemea’s gripping debut, it’s named after a girl: theirs are hot summer night anthems, fit for erotically-charged dance clubs and nights on the beach. As we slip into the coldest part of the winter, “Maria” and Blasfemea feels like the perfect antidote. And don’t be intimidated for a minute by the band’s country (or language) of origin; all of Blasfemea’s songs are sung in English.

They’re naturals for video, too: good-looking, sharply-dressed, and at ease in front of the camera. The four members of Blasfemea look the part of international pop stars; better still, they act like they know it. That casual confidence is apparent in every frame of David Francisco and Maria João Carvalho vibrant clip for “Maria”. (Francisco and Carvalho are themselves cultural ambassadors for their nation; they’re one of the nation’s best new music video teams, and their creative clip for The Vicious Five’s cheekily-titled “Lisbon Calling” is a call to arms for all Portuguese rock bands.)

The “Maria” video is a torrent of light and color; a twist of an ornate kaleidoscope; a celluloid glimpse of the band’s exuberant mindstate. There’s plenty of footage of Blasfemea in action — and further video evidence for those who call the quartet one of Portugal’s most exciting live bands. Often, it seems as though the group is performing in a mystic netherworld: spectacular landscape footage is projected behind them as they play, and images of galaxies and nebulae are superimposed over the concert. It’s a breathtaking light show — a three-dimensional experience preserved on 2D media — and it creates a remarkable feeling of motion, depth, and mystery. In some shots, the musicians’ shadows play; in others, illumination dances off of fretboards and drum rims. Everything seems to be exploding into outer space, traveling at warp speed, melting into pure white light.

We’re excited to be working with the team at La Lisbonera to bring you this international offering. If you need more info, call Andy Gesner at 732-613-1779 or e-mail us at info@HIPVideoPromo.com.