The Blind Boys Of Alabama “Last Month Of The Year” 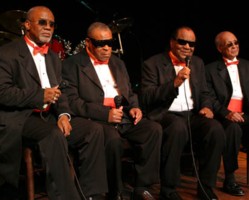 Seasons Greetings everybody, it’s Andy Gesner and the staff from HIP Video Promo, checking in with more great music from legendary artists we were proud to promote at the end of 2002. Usually, we send you videos from new bands that are just beginning to make their mark in the world of popular music. Today, we’re doing the opposite: we’re here to get you excited about the latest clip from a musical act that has been recording since 1937. The Blind Boys of Alabama may not be a household name, but for the past six decades, they have been among the premiere gospel singing groups in the world. And thanks to the people at Peter Gabriel’s label Real World , they’re finally receiving nationwide attention for their magnificent music.

The Tuskeegee, Alabama singing act has already become a magnet for top-flight musicians looking for opportunities to collaborate. By pairing different contemporary players and singers with the Blind Boys, recent records have created some astonishing musical alchemy. Beginning in 2001 with the groundbreaking Spirit Of The Century, the group has incorporated R&B, blues-rock and skewed pop into their gospel by interpreting songs from composers ranging from Tom Waits to The Rolling Stones. Folk virtuoso Danny Thompson has added his standing bass to their records, Robert Randolph & The Family band have backed the singing group, harmonica legend Charlie Musselwhite has made guest appearances, and Ben Harper has contributed a stunning lead vocal. Clearly, the Blind Boys of Alabama is an act with friends.

Go Tell It On The Mountain, a Christmas album, is a set of glorious gospel interpretations of seasonal favorites. Extending the collaborative logic of Spirit Of The Century and the even more star-studded Higher Ground, the songs on Mountain feature some of the best-respected rock and pop musicians of the past thirty years. Chrissie Hynde lends her voice to a gorgeous retelling of “In The Bleak Midwinter”, as the incomparable Richard Thompson adds luminous Stratocaster. Spearhead’s Michael Franti makes the anxiety of “The Little Drummer Boy” palpable, while Aaron Neville joins in the exultation of “Joy To The World”. Throughout the record, Michael Jerome’s drumming and John Medeski’s scalding organ bob and weave through the mixes, supporting the gospel group, adding color, but never overwhelming the structure of the songs. These all-star musicians are united in their respect for The Blind Boys of Alabama, and their enthusiasm about playing with such a legendary gospel act is infectious.

Yet “Last Month Of The Year” – a traditional piece arranged by the Blind Boys – shines the spotlight on the venerable septet, and highlights the butter-smooth lead vocals of the amazing Jimmy Carter. Carter’s call-and-response with his groupmates is no less than electrifying: he darts and swoops through the music like a hummingbird, rejoicing, cajoling, coaxing every ounce of celebratory spirit out of the lyric. He sings with the easy assurance of a veteran crowd-rouser – confident, mellifluous, and always powerful.

The clip for “Last Month Of The Year” reflects the classic gospel underpinnings of the Blind Boys’ music. The group is shot in a handsome, ornate church amphitheater: they stand on the stage, perfectly arrayed, and testify to the holiday with verve. During the concert, parishioners stream in from a neighboring church where the response to the nativity is somewhat less energetic. The Blind Boys welcome the refugees to their church – a place where the spirit always moves.

Here at HIP we’re eager to help you get your holiday off to a grooving start with The Blind Boys of Alabama. Many thanks to Bruce Sullivan at Narada for giving us the opportunity to bring you this uplifting and festive video. If you need more info call Andy Gesner at 732-613-1779, or email info@HIPVideoPromo.com.