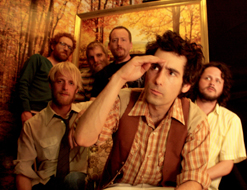 Hey, everybody, it’s Andy Gesner, here with a new clip from one of rock’s great storytelling bands. Blitzen Trapper has made an art out of confounding expectations: in their songs and videos, nothing is ever exactly as it seems. There’s a pleasingly modern twist to their country-rock ballads, their sunny-day melodies often conceal dark edges, narratives take left turns, songs jump genres and defy classifications. Little wonder, then, that fans of adventurous pop and offbeat folk have embraced the band. As pleasing as Blitzen Trapper sounds around the campfire, they’re also a group that makes music that rewards close engagement. Many songs on Furr, their heralded fourth album, are Dylanesque in the truest sense: they’re deceptively complex, poetic, thoughtful, occasionally hallucinato ry, forward-looking but rooted in traditional American musical forms.

“Black River Killer”, a fan favorite and regular concert highlight, is such a song. On the surface, it’s a pure Western outlaw ballad of the classic sort – a story told in characteristically-blunt language by a fugitive on the run from the sheriff. But on closer inspection, the song isn’t anywhere near that simple. The character is morally-ambiguous, and, at times, sympathetic; plus, there’s the strong implication that the narrator was at first wrongfully-imprisoned, and that his experience of injustice turned him into a murderer. And while the character is a timeless archetype and language is intentionally archaic, references to the contemporary world subtly ground the story in the present moment. (The song’s arrangement echoes this tension – chilly synthesizer lines snake around warm acoustic guitar.) Skillfully written and persuasively performed, “Black River Killer” is also quietly topical: it indirectly references the notorious Green River Killer who still stalks nightmares in the Pacific Northwest.

Blitzen Trapper’s most ambitious track (and that’s saying something!) deserved a high-concept video to match. Portland filmmaker Daniel Elkayam had a tough act to follow, too: you’ll remember the gorgeous, animated clip that accompanied Furr’s title track. For “Black River Killer”, he’s upped the production values, and then some – the video features stunning sets, elaborately-conceived scenes, and some seriously trippy computer-generated effects. Shots blur into other shots, and outdoor images somehow become indoor settings; the logic is associative, dreamlike, wholly engrossing. A cast of 150 people appear in the clip, though many of their faces are obscured; several arresting courtroom scenes find crowds hiding behind grotesque masks. We hope you’ll agree that it’s both inspiring and nearly-unbelievable that this clip was shot on an underground band’s modest budget.

We’re shown the initial murder, the narrator behind bars, the magistrate, the angry policeman, the bodies left in the killer’s wake. But the camera is restless and never fixates on one place or thing for long – the scene is constantly in flux; an imbalanced life story told at destabilizing speed. It’s never entirely clear what’s happening or why, and the same sheriff that hounds the narrator in one shot might be slumped face down on his desk in the next. No explanations are given; Elkayam and Blitzen Trapper are content to insinuate and lead. The courtroom scenes are pure bad trip, and they’re presided over by a menacing figure that might be a judge, or a preacher, or some bizarre combination of the two. The same aura of mystery that surrounds the songs on Furr is replicated here – in a clip that makes a dazzling first impression, and is infinitely rewatchable thereafter.

We’re thrilled to be presenting you a Blitzen Trapper video for the second time around! The band will be touring throughout the month of July, so check them out when they are in your area! If you need more info, call Andy Gesner at 732-613-1779 or e-mail us at info@HIPVideoPromo.com. You can also visit www.SubPop.com or www.BlitzenTrapper.com to find out more about Blitzen Trapper.