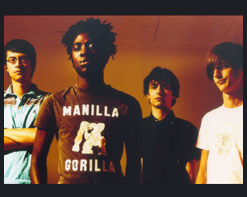 Greetings and salutations to all my cherished programming friends! It’s Andy Gesner and the staff from HIP Video Promo, hoping you are already enjoying a rocking 2007, because we are about to kick it up another notch. It’ll be a year of musical highlights for sure – in fact, we’re thrilled to announce that one is already upon us. Silent Alarm, the debut album by Bloc Party, was one of the best-loved recordings of 2005: an effortless synthesis of angular guitar pop, fashionable dance-rock, and left-of-the-dial Eighties alternative music. Four singles from Silent Alarm stormed the U.K. Top 20 and the album peaked at #3; stateside, Bloc Party topped many best-of lists and became the hippest name to drop in any discussion of cutting-edge modern rock. Silent Alarm intrigued so many listeners that a remix album made the British pop charts. In America, the weblog buzz was deafening, and the Modern Rock chart success of “Banquet” primed the listening public for the full-scale second-album invasion.

The floodgates open on February 6, as A Weekend In The City, the second Bloc Party album, gets its United States release. The first singles from the set have already dazzled British audiences, and stoked anticipation for the full album. Produced by Jacknife Lee – best known for his work with U2 and Snow Patrol – A Weekend In The Citypaces the manic Bloc Party attack just enough to let the songs unfold and envelop the listener. Keke Okereke’s singing has never sounded brighter and bolder, and the band has added a new cinematic sweep to their infectious pop.

Bloc Party has never shied away from confrontational subject matter, and the lyrics on A Weekend In The City are at once sharper and more resonant than anything they’ve previously written. Okereke takes on race and gender politics, intoxication and the lure of clubs, anti-immigration sentiment, and the London bombings and their aftermath. What’s so terrific about Okereke’s perspective is that you don’t always recognize at first how deep it is – and it’s often while you’re dancing and giving yourself over to the abandon of the clublights that the arresting emotional weight and complexity of a Bloc Party song becomes evident.

For instance, “I Still Remember”, a late-album centerpiece, sounds superficially like a bracing, romantic mid-tempo ballad. But probe a bit deeper, and it becomes clear that the narrator is grappling with his ambivalence about the liaison in question, and longing for a second chance. Okereke’s performance is desperate, wistful, and wholly convincing; and “I Still Remember” is sure to be remembered as one of the bravest and smartest love songs of 2007. Directed by Aggressive (The Hives “Two Timing Touch and Broken Bones”!), the clip for “I Still Remember” uses the interior of a train as a moving metaphor for thought, and the passage of time. The camera backs straight away from the rectangular opening at the end of a section, and hops from train car to train car as passengers board and disembark. Okereke walks the aisle, moving toward the lens and singing at the director. When the singer reaches the glass at the end of the car and the camera moves to the next one, there he is again, transported across the divide. Images and riders keep receding as the train moves on (one striking shot finds Bloc Party performing in the space between two speeding liners), but the rectangular opening hovers steadily behind the singer. Finally we reach the end of the train: and there is Okereke, lying on his back in the middle of a field, the rear door of the caboose hovering above him and growing smaller in proportion, like a receding memory.

It is our greatest pleasure to be teaming up once again with Adam Shore, Jamie Farkas and all of the incredible folks at Vice to bring you this dynamic music video masterpiece. Bloc Party is sure to explode right out of the gate in 2007, and we’re thrilled to bring you along for the ride. The band will be heading out on a US tour starting in March, and we’d love to hook you up with video interviews when they come to your town! We encourage you to hop on the Bloc Party bandwagon early, since we are expecting standing room only! If you need more info, call Andy Gesner at 732-613-1779 or e-mail us at info@HIPVideoPromo.com.