Blow Up Hollywood “Where Does The Night Go” 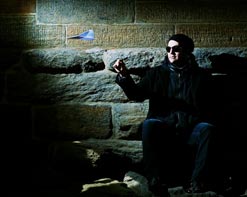 Recently, you received the new Blow Up Hollywood video for “Waiting For My Ship,” the first single from the new album Blue Sky Blond. We described Blue Sky Blond as “an album full of stark, vivid imagery, painting a world that is at once majestic and terrifying, infinite and fragile.” With the new video for “Where Does The Night Go,” a visual like nothing we’ve seen before has been created to accompany the understated song, and there isn’t a doubt in our minds that this “Perfect Day”-esque song will entrench itself in your top ten of 2014!

The response for “Waiting For My Ship” has been exceptional thus far. Vocalist/guitarist Steve Messina is front and center in this clip chock full of contemplation and reflection. In the new video for “Where Does The Night Go,” Messina teamed up with director Tobias Stretch, who previously brought us the haunting Dead Snares video for “The Language”. In the past few years Stretch has established himself as one of the most visually creative and stimulating directors on the east coast. His manipulation of time and color creates something that combines HDR, time lapse, and stop motion into a hallucination-like experience.

For “Where Does The Night Go” Messina has removed himself from the equation entirely, preferring to let the video speak entirely for itself. The video solely follows a disheveled old man living out of his run down old Buick as he struggles through his day, fighting with his own bouts of depression and mental illness. He battles his reflection and resorts to hitting, struggling to keep his wits about him. As he lays his head down in the back seat at the end of the video he is engulfed in white light. Perhaps lapsing into a dream, or perhaps going to a more eternal location.

If there is any artist who can turn these personal demons into art, it’s Blow Up Hollywood. The video is a stunning work of art, and a powerful commentary on difficult social issues. For more information on Blow Up Hollywood, please contact Andy Gesner and the HIP Video Promo staff at (732)-613-1779 or email us at info@HIPVideoPromo.com. You can also visit www.BlowUpHollywood.com for more info.

For info about Blow Up Hollywood’s “Waiting For My Ship” video, click HERE