Blues Explosion “Burn It Off” 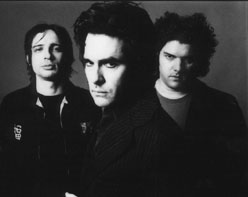 Autumnal greetings to everyone! It’s Andy Gesner and the staff here at HIP Video Promo and I’m proud to announce that the continual stream of cool indy rock videos will be coming to you this fall unabated! We genuinely love all the videos and artists we promote, but every now and then, we get a video that’s so outrageous, so colorful, and so amusing that it practically defies description. Such is the new clip from the Blues Explosion – a band known for taking chances. We’ll do our best to describe this clip for you, but we’re under no illusion that our plot summary can stand in, in any meaningful way, for actually viewing this tremendous clip. This one really needs to be seen to be believed.

Jon Spencer has always been an artist ahead of his time. Since leaving Pussy Galore to start the Blues Explosion, he’s blazed a trail through rough territory that presaged the garage rock revival of the current decade. It’s no exaggeration to say that the sound of the Jon Spencer Blues Explosion of the early nineties – so unexpected and groundbreaking at the time – became, cleaned-up and sanded-down, the cutting-edge blues-rock sound of 2004.

But Spencer and the Blues Explosion keep on pushing forward into the experimental fringe. Damage may be Blues Explosion’s debut for a major label (released by powerhouse Sanctuary), but it is, if anything, even more of an exercise in musical risk-taking than the group’s last few albums with indie stalwart Matador. The raw, skronky guitar workouts are here, for sure, but the album also incorporates funky piano, wild, untamed leads, horns, berserk synthetic sounds, feedback symphonies, whammy-pedal eruptions, and prominent guest vocal appearances from Martina Topley-Bird and Chuck D. Blues Explosion has chosen to work here with some of the most aggressively playful producers in modern music, including Dan “The Automator” Nakamura, Alan Moulder, Jay Braun, and DJ Shadow. The resulting collaboration is a glorious fusion of roughhewn garage energy and experimental recording techniques: modern rock radio as reimagined by mad scientists.

“Burn It Off” is one of the more conventional tracks on Damage – and perhaps to compensate, it’s been coupled with a video that’s anything but. It’s a partially animated clip, but it incorporates performance elements, and while it uses elaborate set design and modeling, its most remarkable feature might be its choreographed and stylized combat scenes. The Blues Explosion are confronted by an army of rock-hating skeletons – residents of a pirate cove on an island populated by mythological beasts. During the course of the clip, the bandmembers (and a gigantic turtle) battle the animated and armed bone-men, a rampaging cyclops, a three-headed hydra, and a silver giant that most closely resembles a Trojan warrior. The musicians use their guitars, drumsticks, and wiles to beat back the skeletal horde, and are finally rescued by a flying saucer(!).

The clip is shot in the style of an old-style Saturday-morning live animation television program, and glistens with the bright yellows and soft blues of fifties monster movies. Some of the animated set-pieces are visually stunning: when the Blues Explosion plays aboard a ship, the roiling sea heaves thickly, like a stirred pudding. The skeletons soar through the sky on flying sharks, fins marked with the Iron Cross. The conflation of images and visual archetypes – pirate stories, World War II movies, cheap pop-out horror flicks, rock performance footage – is heady, and recalls the band’s ability to cheekily synthesize musical forms and traditions. All purism aside, the blues is a mongrel dog, too – and nobody knows that better than Jon Spencer.

One of the most exciting developments here at HIP in 2004 has been our awesome working relationship with new friend Michael Plen at Sanctuary Records. This senior exec really cares about regional programmers, knows what you want and gets it for you! Major thanks to Michael for bringing HIP on board for this terrific campaign. We will be working very closely together and have every intention of making sure your Blues Explosion needs are met in a timely fashion. If you need more info call Andy Gesner at 732-613-1779 or email info@HIPVideoPromo.com.