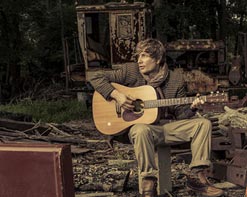 Florida native Brian Mackey’s influences are as varied as his inspirations. A classical pianist, he loves modern master Bob Dylan, Jim Croce and The Beatles as much as composers Mozart and Beethoven. When we brought you Brian’s most recent video for “America,” it showcased his meticulous combination of pop-rock, Americana, and folk. It was a moving piece that was a prime example of how far he had come with fourth release and first full-length release, Broken Heartstrings. But in order to paint a full picture of Brian, we’d like to take a stroll down memory lane today and shine the spotlight on the title track and video of his last EP, Honest Love.

Much of the magic and success of Broken Heartstrings was born out of the same team that Brian assembled for Honest Love, which included producer Sam Ashworth, son of legendary songwriter and producer Charlie Peacock. The results were powerful and immediate, including placements in film (29,000 Wishes, 1 Regret) and TV (Unicef’s “Live Below The Line”Campaign, Travel Channel’s The Layover with Anthony Bourdain, and Arla Foods “Honest Love” Butter commercial in Denmark). While he gears up to record new music, we thought now would be the perfect time to introduce the uninitiated to his older work by going back a few years to the “Honest Love” video.

The concept of “Honest Love” is a simple one, to show that a little love can go a very long way, but it’s in the execution that this video really touches the heart. Set on a beautiful day in downtown Chicago, the video follows Mackey and a variety of strangers on the street showing bits and pieces of kindness towards a fellow man. A common theme is the use of American Sign Language symbol for “Honest Love” that lights up the faces of everyone on camera. Mackey is busking on the streets and collecting donations, but it is the gift of love that he cherishes most as evidenced by him electing to claim a single delicate flower as his own and leave behind the money he’s collected for those less fortunate than him. This fan favorite video is a beautiful piece sure to brighten up even the gloomiest of winter days.

We are very pleased to once again be working with Brian Mackey and his talented team! Whether it be copies of the Honest Love EP, or copies of the most recent full-length, Broken Heartstrings, we have got you covered so please reach out! For more information on Brian Mackey please contact Andy Gesner at (732) 613-1779, or e-mail the HIP Video Promo staff at info@HIPVideoPromo.com . You can also visit www.BrianMackeyMusic.com for more info on Brian Mackey.

For info about Brian Mackey’s other video “America”, click HERE