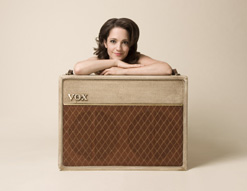 Greetings, everyone — it’s Andy Gesner and the staff from HIP Video Promo bringing you clip number two from a big HIP favorite! It wasn’t too long ago that we sent you the endearing clip for Brittany Shane’s cover of “Pretty In Pink”. You’ll recall we assured you that the San Francisco-based Shane was a gifted songwriter as well as an imaginative interpreter. Here’s your proof — a sizzling original with a muscular guitar riff, witty and self-aware lyrics, and a wildly-catchy chorus. The entire Have Heart Live Young album is like that: it’s one delicious power-pop confection after another. The San Francisco Examiner compared Shane’s writing to that of the Breeders and early Liz Phair, and called the album a “chiming, charming hookfest”.

Indeed, back home in the Bay Area, Shane is a star — recognized as one of the finest songwriters in town, and, along with her band, a fiery and formidable concert attraction as well. And as her tireless tour schedule takes her from coast to coast, the rest of the country is waking up to Brittany Shane’s music, too. En route to her showcases at South by Southwest, she’ll be returning to Texas; after that, it’s the Pacific Northwest, New York and the Mid-Atlantic, the Great Lakes, and a hotly-anticipated return to Northern California. Shane has made herself a regular at San Francisco’s Cafe Du Nord, The Fillmore and Hard Rock Cafe — but she’s proven she can win over audiences in more proletarian locales, too. Wherever she plays, she makes new fans; by this time next year, we fully expect she’ll have a national reputation commensurate with her talent.

“Only Sunday”, her latest single, might just take her there by itself. It’s that irresistible: punchy and immediate enough for commercial radio, and sufficiently gritty for fans of ambitious left-of-the-dial pop. Shane’s performance is magnetic as always; she’s the rare sort of frontwoman who calls listeners to attention the moment she begins to sing. Brittany Shane doesn’t make background music. Similarly, her videos are attention-getters — her screen charisma and good humor are undeniable, and she’s at complete ease in front of the camera. Director T. Hunter McCann — an LA-based filmmaker whose films are always attention-getters — isn’t afraid to give Brittany Shane the full rock star treatment in his clip for “Only Sunday”. There’s plenty of footage of the musician in action here, singing and strumming with the ferocity that has made her famous in Northern California. The world’s irritants still manage to penetrate this redoubt — and Brittany Shane needs to shoo away lawyers holding contracts, bill collectors, bad suitors, and others intent on shattering her resolve. In performance, McCann rings the band with floodlights: it’s a magic circle warding off unwanted intrusion.

We’re very excited to once again be working with Brittany Shane and Bob Spector to bring you this commanding new video. If you need more info, call Andy Gesner at 732-613-1779 or e-mail us at info@HIPVideoPromo.com . You can also visitwww.BrittanyShane.com to find out more about Brittany Shane.