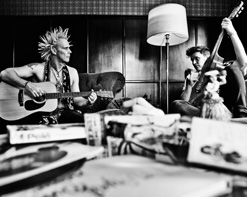 Howdy programmers! It’s Andy Gesner and the HIP Video crew, here with a new video from the crew at SideOneDummy that will get you talking as soon as you feast your eyes upon it. It’s probably safe to say that you’ve never heard or seen anything like Brothers Of Brazil before. In fact, we’re going as far as saying that this clip may be the most original and inventive music video you will see all year. We dare you to enter into the bizarre world of “Vanity Funk” and come back with your sanity in one piece.

For the past three years, the brotherly duo of Supla and Joäo have been making some of the most original songs around by combining elements of traditional Brazilian music such as Bossa nova and samba with rock and funk to create a unique sound that’s won over countless fans in the band’s home base of South America—and now they’re finally ready to expand worldwide with the release of their self-titled album that just hit the marketplace late this summer. The duo was started when the brothers got a job hosting their own national variety show in Brazil called Brothers on Rede TV. The show was a perfect platform for the duo to take their chemistry into the music medium and on the road. Their debut album was produced by Mario Caldato, Jr. (Beastie Boys, Tone Loc). It may be the first that those of us outside South America have heard from the band, but judging by the reaction Brothers Of Brazil have gotten all over the world as a result of their raucous live shows it certainly won’t be the last.

“Vanity Funk” is certainly funky, but you can’t just call it that because… it’s not. The song combines unique spoken and sung vocal harmonies, crazy rock and jazz drumming, and nylon string acoustic guitar playing with the bass notes played with a thumb, eliminating the need for a third member. This is not your typical indie rock duo as the music is completely organic and employs a mixture of sounds not found in the rock genre, with the closest comparison being a Brazilian version of Gogol Bordello! The group never lets the weird get in the way of their songwriting, claiming that “The most important thing to us is to have a good song because if a song sucks it doesn’t matter how many styles you’re mixing together.”

When it comes to style, Brothers of Brazil have enough of it to impress Lady Gaga herself. The duo is always found dressing in over the top outfits that resemble a crossover between Billy Idol and 80’s glam. “Vanity Funk” is a visual treat in itself – the video is shot entirely in black and white and starts out with a classical theme of a cat walking on some piano keys. These first few seconds are probably some of the most deceiving moments of the music video, as the clip quickly progresses into racy fetish territory. The duo is eventually found surrounded by gorgeous women in latex cat suits, some of whom are on a leash! Never explicit, but always on the edge of it is where Band Of Brothers choose to exist.

The folks at SideOneDummy have certainly delivered an unexpected treat at our doorstep, and we hope you will join us in indulging in the quirky cool of Brothers Of Brazil. The band is currently on the road in the States, so be sure to check them out in person and spread the word. We’d love to hook you up with the self-titled record, so don’t be shy about reaching out to us. If you need more info, call Andy Gesner at 732-613-1779 or e-mail us at info@HIPVideoPromo.com. You can also visitwww.SideOneDummy.com or Facebook to find out more about Brothers Of Brazil and any tour dates near you.