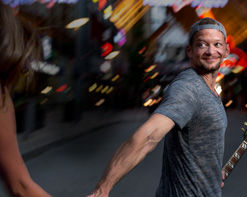 Though influenced by rock and roll, Bryan Fox is a country musician at heart. While he makes regular trips to Nashville and California to write and record music, this Louisville, Kentucky native spends his days in a different way… as a dentist! When he entered college, he had scholarship opportunities for trumpet and for academics; he chose to go the academic route and pursued music as a hobby. But when he got to dental school, he found himself in a recording studio with Hugo Ferreira (who is well known for being the lead singer of the American rock band Tantric), and the song they recorded (“Yes”) went #1 on WLRS (Louisville rock radio). Major record labels took attention just before the music industry crashed in the early 2000s, and while he’s not currently with a label, he’s maintained a drive to pursue music on a serious career level.

Bryan Fox first shared “I Saw My Ex-Wife Workin’ At The Bass Pro” on his 2010 album Big City Lights; six years later, in 2016, he released the album It’s Gonna Be That Kind of Night. When it came time to create a music video in early 2017, he dug into his whole catalog to find the song that would make the best visual, and quickly settled on “Bass Pro.” Fox spent several months trying to convince Bass Pro to let him film the video in their store, but when the corporate powers-that-be said no, he reworked the song as a parody – “I Saw My Ex-Wife Workin’ At The Bait Pro” – and set off to making the video.

Finding a spot to shoot the “Bait Pro” video still wasn’t easy, but after months of searching, Fox found a mom-and-pop bait store in Arkansas that would serve as the shooting location and the right model to star alongside him. The video features cameos from three real-life stars: Michael Starr (lead vocalist of Steel Panther) makes an appearance in the yard with the hose, Buffalo Stille (of Nappy Roots) steps up to the role of assistant manager of the Bait Pro store and Conrad Bachmann (who was in movies like Tremors and The Astronauts Wife) who plays the old man raking in the yard. “Bait Pro” is an entertaining clip where everything is exaggerated just enough to make it clear the story is a work of fiction, but it’ll make you laugh nonetheless. It’s clear that Bryan Fox takes everything seriously….except himself!

While he’s generally a happy, optimistic fellow, Bryan Fox believes that “music is supposed to encompass every kind of emotion”, and whether his songs are irreverent, introspective, or poignant, they always have something intelligent to say. 2018 is set to be a busy year for Fox, who, on a recent trip to LA, co-wrote and recorded a song with Michael Starr called “Eye Candy”, which was produced by Anthony Resta (who has worked with several of our beloved HIP clients: Tremble, Jared Dylan, My Silent Bravery, and Natalise + the Sunset Run). We’d love to see “I Saw My Ex-Wife Workin’ At The Bait Pro” including in your regular programming and rest assured we’ll have plenty of outstanding Bryan Fox merch to set up online/on-air contests and giveaways throughout the campaign, so please let us know what we can do to make that happen! Please don’t hesitate to contact Andy Gesner and the HIP Video Promo team at (732)-613-1779, email us at info@HIPVideoPromo.com or visit www.BryanFoxBand.com for more info on Bryan Fox.