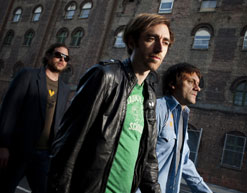 A PLACE TO BURY STRANGERS

Hello indie rock lovers, it’s Andy Gesner from HIP Video Promo, once again bringing you new music from artists that are about to break big! Do you appreciate resourceful rockers? Look no further than Oliver Ackermann, frontman and chief noisemaker in A Place to Bury Strangers. By day, he manufactures handmade guitar pedals – the same units that feature so prominently on his incendiary recordings – at his Death By Audio studio in Williamsburg. At night, he throws the doors of Death By Audio open to local bands looking for a laboratory to conduct their brave sonic experiments. The APTBS headquarters has become the heart of the D.I.Y. enterprise in New York City (sort of an East Coast analog to the legendary Smell in Los Angeles), and Ackermann and his bandmates are recognized around town as the undisputed champions of the psych-rock scene.

That would be enough to satisfy ninety-nine per cent of the bands in NYC – even ambitious ones! But A Place To Bury Strangers always demands more. For the past two years, they’ve kept to a rigorous touring schedule, appearing on stages large and small all over the globe. They’ve crisscrossed North America with Black Rebel Motorcycle Club and crashed through Europe with MGMT. They’ve appeared at Coachella, Reading and Leeds, All Tomorrow’s Parties, the Siren Festival in Coney Island, and too many other festivals to list. They’ve shared stages with inspirations: My Bloody Valentine, the Jesus and Mary Chain, the Brian Jonestown Massacre. Last year, Trent Reznor – well-known for his discernment and taste – personally selected A Place To Bury Strangers to open shows for Nine Inch Nails on the Lights In The Sky tour. Wherever they’ve gone, the band has won fans and blown minds, expanded the fanbase, and exposed the enthusiastic and unsuspecting alike to the delights of dramatically-abrasive NYC rock.

Frequently billed as “the loudest band in New York”, A Place To Bury Strangers is much more than that. To be sure, their maximum volume compares favorably to that of any hard rock group you can name. But there’s also great subtlety to the group’s approach – an unerring sense of balance and eye-of-the-storm grace that doesn’t desert APTBS no matter how thunderous they get. That’s apparent on “In Your Heart”, the lead single from the hotly-anticipated Exploding Head, the band’s second full-length and first for Mute Records. Amidst the bludgeoning, there’s beauty; in the scream of guitar and crash of cymbals, you’ll find uncommon cool.

A revelatory live act, A Place To Bury Strangers has been augmenting their performance with live video since their beginnings in the NYC club circuit. Visibility challenges be damned, Ackermann and his team have proven to be totally committed to video – and as the stages have gotten bigger, so have the screens. The projections do more than merely heighten the psychedelia – they also amplify and underscore ideas in APTBS’s music that aren’t immediately apparent. This is a group that can be appreciated on many levels, and for many different reasons: some long-time fans insist that the trippy video stream is reason enough to catch A Place To Bury Strangers in performance. The “In Your Heart” clip incorporates elements from the projections; more than that, it thematizes the importance of visuals to this sonically-adventurous trio. Ackerman is shown backlit and projected on a distant screen. We don’t watch the singer in action; instead, we’re shown a refracted (and occasionally distorted) image of his image. Sometimes the band is swamped by shadows; sometimes they snap into brilliant focus. In striking, evocative footage, multicolored ink spills and billows before a white backdrop. It’s an explosion of color, a Rorschach test in action, an invitation to dream from a band unafraid to walk the perimeter.

We are very excited to have the chance to work with this amazing band for the first time, big thanks to Stephanie Trick and the Mute crew for making it happen! You can catch the band this fall touring all across the US! If you need more info, call Andy Gesner at 732-613-1779 or e-mail us at info@HIPVideoPromo.com. You can also visit www.Mute.com orwww.APlaceToBuryStrangers.com to find out more about A Place To Bury Strangers.