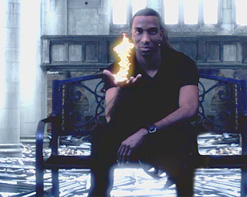 Hello programming friends, it’s Andy Gesner and the HIP staff here with an otherworldly hip hop video from an artist that refuses to settle for conventions of the genre, and prefers to be the man behind the wheel of every element of his presentation. He’s a producer, he’s a rapper, he’s a multi-instrumentalist, he’s Byron Barrett and he’s ready to inject your system with a hip hop clip that collides gothic and urban worlds together in “Make It Go.”

Byron Barrett is a military brat who’s father, while serving our great nation, dragged his soul around the country and across the ocean. From Kentucky to California and from there to Germany, Barrett has soaked up all the intensities of the sun, as well as the rich cultures each respective locale has to offer. He has discovered the call of gospel and hip hop, while popping the question of “why do things sound the way they do?” This restless fire brought Byron the knowledge of studio production layers, taught him to play the keys, and developed a distinct rhyming flow. A man of fresh and unusual style, Barrett is self-possessed without being self-absorbed, grandiose without being aggrandizing.

“Make It Go” is a sharp and catchy hip hop track that features a smooth and effortless flow from Byron Barrett himself, as well as some of his crew. The rhyming scheme is delivered over a driving beat and hypnotic melody that provokes the listener to move. Of course, it is important to note that Barrett, himself, forged all of this production. What truly separates Barrett from the hungry pack is his fashion and video style. The clip is set in a gothic domain that resembles something one would see in Blizzard’s Diablo universe. The opening scenes take place in a dark castle that is filled with fiery portals and gargoyle statues. The rapping Byron hops around his lair from ledges to gargoyles. Barrett’s style is also just as individual as his locale; sporting outfits that match his theme, rather than traditional hip hop clothing. This vision is definitely unusual in the genre and will make Byron Barrett a standout act amongst the competition. In the music world, presentation is just as important as the song itself, and, fortunately, this rising star has both.

We are extremely excited to bring you a video from a talented and genuine artist that not only elevates music videos in the hip hop genre, but also the medium as a whole. We pride ourselves in bringing you the most original and inventive musicians and hope you will join us in exposing this clip to your viewers. If you need more info, call Andy Gesner at 732-613-1779 or e-mail us at info@HIPVideoPromo.com.