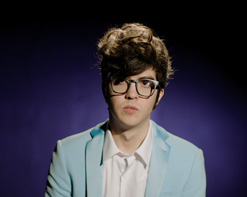 Car Seat Headrest fans, new and old alike, will be elated to learn that Will Toledo’s 2011’s Bandcamp masterpiece, Twin Fantasy, has been re-recorded and re-imagined and will come out on February 16th on Matador Records. With a seven-piece band in tow (including members of Naked Giants), Car Seat Headrest will bring its explosive and revelatory live show to Australia, Europe, and select West Coast cities through the first half of 2018, with a full US tour to be announced at a later date.

Toledo always knew he would return to Twin Fantasy. He never did complete the work. Not really. Never could square his grand ambitions against his mechanical limitations. Even so, even awkward and amateurish, Twin Fantasy is deeply, truly adored. Legions of reverent listeners carve rituals out of it: sobbing over “Famous Prophets,” making out to “Cute Thing,” dancing their asses off as “Bodys” climbs higher, higher. The distortion hardly matters. You can hear him just fine. You can hear everything.

The album announcement comes with the release of “Nervous Young Inhumans,” is a frenetic, anthemic, split-screen choreographed crescendo, and the result of Toledo’s visionary work as a first-time director. While the first pass of Twin Fantasy was always an unfinished bit of business, the video for “Nervous Young Inhumans” is as complete and thorough of an execution even the most season director could hope for. Using a side by side framing of dueling shots that are sometimes juxtaposing and sometimes perfectly in sync, the entire clip is expertly lit, colored, and shot. Fully showcasing his talents as a performer, Toledo carries the visuals from beginning to end, engaging the camera with a musical and physical dexterity that leaves viewers eager to come back for another view.

2018 is going to be a big year for Car Seat Headrest and thanks to the fine folks at MATADOR, we’re here to help you get this into your programming in any way possible. Please feel free to hit us up here at HIP Video Promo and let us know what we can do on our end to make that happen. Please call (732)-613-1779, email us at info@HIPVideoPromo.com or visit www.CarSeatHeadrest.com or www.MatadorRecords.com for more info on Car Seat Headrest.