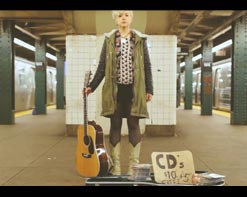 Listening to Cariad Harmon, it’s hard to believe that the singer-songwriter spent much of her youth galavanting through the streets of London and dancing until the wee hours of the morning to legendary house and techno DJs at West London’s now defunct Club UK. It’s not surprising, however, to learn that after the parties were over, Harmon returned home to secretly throw on a Tracy Chapman or Bob Dylan album and strum her acoustic guitar.  Being caught between two worlds is a common echo in Harmon’s life. She grew up with an English mother and an American father and often struggled with feeling like an outsider in both Countries.

These divergent set of influences have served her well, with the proof being her newest single, “I Wanna Be Famous.”  A brilliant, concise folk pop number that still manages to have a propulsive beat behind it that gives it the energy and immediacy of the dance hits she grew up listening to. The accompanying video is a beautifully shot and darkly comic series of vignettes that create a powerful narrative about the difficulties of following dreams and the universal hunger for fame and notoriety, so present in our social media-savvy culture.

Cariad’s songs have caught the attention of both fellow musicians and artists alike. Her new self-titled album boasts performances by Jess Wolfe and Holly Laessig of Lucius and Mike Savino of Tall Tall Trees. It was co-produced by Oli Rockberger and Chris Abell (Mat & Kim, Pete Yorn, Alabama Shakes), while executive producer Matt Pierson (Grammy nominees Kirk Whalum, Brad Mehldau) produced 5 of the album’s 11 tracks, and mixed and mastered the project giving the album a salient voice. Her music has been featured in TV and film, such as The Hawk Is Dying (starring Paul Giamatti & Michelle Williams) and most recently a choice placement of her song “Like You,” on the smash TV Land hit Younger. Perhaps the most memorable of her songs, however, would have to be the new single for “I Wanna Be Famous,” and the brilliant music video accompaniment.

Harmon, along with director Scott Gordon Bleicher (VH1 soul, Scruffy City Film & Music Festival) shot the entire video in true indie/guerrilla-style in and around New York City.  Locations span from the West 4th Street subway station, to a friends kitchen in Greenpoint, to an old Bushwick Laundromat where the two friends arrived unannounced one Sunday morning and quietly set up a single camera while customers around them raised some eyebrows and got on with their weekend chores.

Cariad naturally steps in front of the camera to portray a variety of everyday folk, whether it be the waitress at your local diner, the struggling stand-up comedian (look for a cameo here from Carla Rhodes – Last Comic Standing, The Today Show), the tired housewife with a child on either side, even the Times Square chicken, all of whom sing directly to the camera about wanting to be famous. The lyrics sing about being remembered, catching fire, and being someone. Though the portrayals are not glamorous, they are a poignant reminder that everyone still has dreams and aspirations, no matter the age or situation.  The final verse has a more modest set of requests, such as keeping it simple and merely leaving proof that someone was here.  The characters feel a little less starry-eyed, perhaps even resigned to the fact that they will most likely disappear, but the implication is, we are all somebody, but for a little love and support. The best part about this video is that there are so many layers of interpretation to be had in under two minutes, so have at it and enjoy!

We’re very excited to be working with Cariad Harmon to bring you this exceptional new video and are anxious to do anything we can to get it into your programming. Please drop a line to Andy Gesner and the HIP Video Promo crew at (732)-613-1779 or email us at info@HIPVideoPromo.com . You can also visit www.CariadHarmon.com/ for more info on Cariad Harmon.