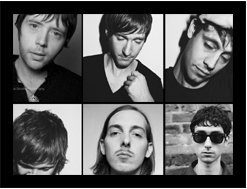 Happy holidays, programmers! It’s Andy Gesner and the staff here at HIP Video Promo, spreading the good news about addictive, hand-clapping symphonies created by a new British sound you’ll be digging on for many years to come. In some ways, Cazals are the new kids on the block–their debut album, What of Our Future, emerges on the US scene this February on their label The Hours— but they’ve already snatched up an impressive following, due to the furious energy in their live shows. And although at this point they’re often the opening set rather than the main event, they create a whirlwind, and the audience can’t help but get caught up in it, moving along, getting involved, dancing. Their shows are never stagnant. Through these live appearances, audience members—turned Cazals fans—have helped spread the message about them, and they’ve gathered groupies from around the world. Thus, their newbie status hasn’t lasted long.

Cazals create music by using guitar-driven tracks—rolling along like a train engine– pressed upon by experimental, free-flowing strains of synths, New Order-style. The synths weave in and out, creating finger-snapping beats and giving their tracks a danceable, fun, foot-stomping feel. And the vocals are raspy, sullen, and gritty, adding a dirty, stripped-down, old-fashioned rock n’ roll into the tracks. This mixture of experimentalism and straight-out rock is what makes Cazals so intriguing. They fling a fishing line out into the unknown, return with a few juicy tidbits, then throw it out again. By delving into unique innovation, and then pulling back into familiar territory, Cazals are winning approval from indie and mainstream fans alike, uniting both sides of the tracks.

Although we’re well aware that historically speaking the British and the French have been at odds, but we’re here to tell you that Cazals is all about bringing people together with their music! In addition to their relationship with French label Kitsuné, Cazals incorporate a French influence into their video for the track “Someone, Somewhere.” The Cazals employ two legendary French icons in the clip. One of them is Monsieur A., a celebrated French graffiti artist, who produced the clip. It also utilizes one of his artistic creations, a pink stick figure character with long, string-bean legs and an X for an eye. Another one is Lou Doillon, a model and actress lauded for her unusual looks, and her musical lineage. Her mother, legendary singer and actress Jane Birkin, contributed faked female orgasmic sounds to a French top 10 hit back in the 60s with “Je t’aime, moi non plus”, which was in turn accompanied with masive public outburst and the song being banned in 10 countries! We would also be remiss to mention that her step-father is the legendary Serge Gainsbourg. Doillon and the stick figure dance along city streets, twirling and stomping their feet all over the place. At the end of the clip, Doillon and the stick figure share a kiss. This end scene is both sweet and strange at the same time—is a relationship with a stick figure possible? Could this ever work out between them?

It is a tremendous pleasure to work with Gautier Pellegrin and the rest of the folks at The Hours to champion this phenomenal clip from Cazals. If you need more info, call Andy Gesner at 732-613-1779 or e-mail us at info@HIPVideoPromo.com. You can also visit  Facebook to find out more about Cazals.