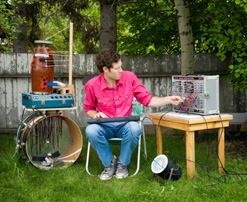 Greetings programmers, it’s Andy Gesner and the staff from HIP Video Promo, ever so proud to be spreading the word about a remarkable new artist. Every now and then, we’ve sent you a music video directed by the musicians the clip is meant to promote. As you’d expect, these are invariably smart and coherent, and they’re always snug fits with the song. Who, after all, knows better what the artist is trying to communicate than the artist himself? Over the years, we’ve also sent you plenty of animated clips; these are particular favorites of ours, because they’re always fanciful, hallucinatory, wildly imaginative. But we don’t think we’ve ever sent you a video that has been animated by the musician. That changes today with Chad VanGaalen’s staggering clip for “Molten Light”.

There’s very little separation between VanGaalen’s art and his music. The young Canadian singer and songwriter pens strange and ghostly songs; his animation is similarly vivid and dream-drunk. Most of VanGaalen’s music is home-recorded (he’s even built some of the odd instruments that appear on his albums), and thus it often sounds intimate, naked, and perhaps even a bit primeval; his animation, too, has a hand-drawn vigor that speaks straight to the deep unconscious. Prior videos – for “Clinically Dead”, “Flower Gardens”, and “Red Hot Drops”, all from the heralded Skelliconnection album – are arresting, evocative, and more than a little bit spooky..

VanGaalen’s characteristic voice contributes to the haunting quality of his recordings. It’s high, thin, and pure: perfect for telling macabre stories. Appropriately, then, the lead single from the recently-released Soft Airplane concerns an act of revenge wrought from beyond the grave. Two brothers murder a woman, destroy her body, and then flee for the safety of a church – but no measure can prevent the spirit of their victim from arising and destroying them. This is a fairy tale, but a barbed one, and it’s impossible not to root for the ghost, and cheer as she exacts vengeance against her killers. VanGaalen’s greatest coup might be how easily he manages to turn “I’ll find you and kill you” into an irresistible hook and a true singalong chorus!

As if the recorded version of “Molten Light” isn’t arresting enough, VanGaalen’s animated clip brings this brutal tale to vivid life. Recent work on other people’s videos – he’s done animated clips for Love as Laughter and Guster, among others – has made the Calgary singer a master of the form, and here he tells his three-minute story with the assurance and whimsy of a twisted Disney. His illustrations here are bold, disturbing, fascinating, impossible to stop looking at; we say with great confidence that this is the best work he’s ever done.

The animator tells the story of the song frame by frame, embellishing for dramatic effect here and there, but mostly keeping to the text (in fact, he often has the characters sing the lyrics to each other). We watch the brothers steal into the woman’s bedroom and remove her heart, and we see her ghost rise from the depths and chase after the murderers. The church offers no comfort: like every setting VanGaalen draws, the structure seems shaky, unsteady, acidic, and destabilized. Finally, the woman’s ghost grows to monstrous size and mind-warping design – she finds her quarry, destroys the brothers, and celebrates as her eyes dance across her shape-shifting face.

Many thanks to the Sub Pop crew for hooking us up with this awesome clip, as well as plenty of copies of Soft Airplane for your on-air contest or giveaway needs. If you need more info, call Andy Gesner at 732-613-1779 or e-mail us at info@HIPVideoPromo.com. You can also visit www.SubPop.com or www.ChadVanGaalen.com to find out more about Chad VanGaalen.