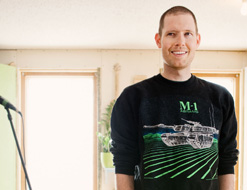 Greetings programmers, it’s Andy Gesner and the staff from HIP Video Promo, ever so proud to be spreading the word about an artist in every sense of the word. Chad VanGaalen is as well known for his musicianship as he is for his artistic ability to bring animations to life. Once again, watching his Sub Pop offering “Peace On The Rise,” we are able to see what happens when a musician can fully express his emotions visually to match the song.

We usually start our hype sheets with the artist’s greatest accomplishments and media buzz, but it would be a disservice to this visual masterpiece to try to overshadow it in such a superficial way. VanGaalen lets imagination be the only limit in this wildly inventive and absolutely exploratory animated clip. The video takes viewers into a far away world via spacecraft. The main hero is a space conquistador who lands on a world teeming with life and is given a guided tour by a local inhabitant that resembles a Native American crossed with one of those twisted blue aliens from Avatar. As they set out to explore the mainland in search of a specific type of bird, they encounter hundreds of assorted species across their journey. However, what makes this animated world so unique is that it truly feels alive as creatures are not only active all at once on the screen, but also live in interconnected layers. For example, as the duo finally find the bird in its natural habitat, it nonchalantly picks off bits of food from the soil. However, when the spaceman uses his complex binoculars to examine the creature, we are given a glimpse into the microscopic universe existing near the bird’s feet and how the bird is actually feeding on eggs that are produced by a certain crablike insect! To see all of this in action feels like watching a National Geographic special, as it is so fully filled with living, breathing existence. The clip comes to a close in what might be the most complex animation sequence in this circle of life – a creature that morphs endlessly into various faces, plants and animals so intricately that one must stop and review the entire sequence to take in all of the details and shapes. VanGaalen, fully aware of the scope of his creation, is even currently running a contest for viewers to find specific objects within the clip at www.diaper-island.com.

“Peace On The Rise” is the leading single from VanGaalen’s fourth full-length album titled Diaper Island. The record is filled with eclecticism, veering from acoustic folk songs to electronic synth workouts, driven by VanGaalen’s prolific recording habits. The singer-songwriter has recently told a reporter that he recorded around 80 songs leading up to this album. While the video portion is absolutely boundless, the song is intentionally constrained in order to preserve a sense of cohesiveness and melody. The de-tuned guitars of “Peace on the Rise” carve close to the sound of 1990s indie bands like Sonic Youth and Pavement. This honest and gripping number plays on perfectly to the limitless expanse of Chad VanGaalen’s visual approach.

The artistry behind Diaper Island does not go unnoticed by the media. Pitchfork was instantly hooked by the presentation of this cool record, stating that the songs found here “confirm VanGaalen’s status as gripping songwriter as well as a producer.” The uber influential music site also featured the video as part of its “TV” section. VanGaalen has also been a rising name amongst the festival crowd, performing at the Primavera Sound Festival recently. VanGaalen has also been putting his artistic hand to work, recently animating the “Not Enough” video for J Mascis. VanGaalen is currently in preparations for his United States and Canadian tour, which kicks off this June. If you would like to attend any of the dates or interview the singer, please let us know and we can make arrangements.

Many thanks to the Sub Pop crew for bringing us this killer clip, as well as plenty of copies of Diaper Island for your on-air contest or giveaway needs. If you need more info, call Andy Gesner at 732-613-1779 or e-mail us at info@HIPVideoPromo.com.