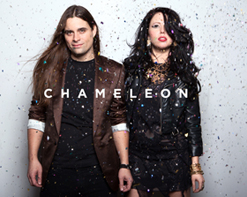 Based out of the heart of New York City, the rock-pop duo known as Chameleon offer a contemporary and noteworthy sound that creatively captivates their audience. HIP Video Promo is excited to introduce the enigmatic and forthcoming video clip for “Anthem.”

Chloe Lowery and Andrew Ross have cultivated a style and sound that they are proud to call something different. Stemming from different musical backgrounds, the basis of Chameleon consists of influences ranging from hard rock to psychedelic and soul. Chameleon formed during the summer of 2011 after successful solo collaborations with artists such as Big Brother and the Holding Co., Everclear, and Chris Botti. They have honed their sound into a distinct collaborative effort that is undeniably their own.

Their debut EP Something in the Water, was released via NoisTrade earlier this year and received an overwhelming response and demand for more. Joining forces with cinematographer Jimmy Negron and video editor, Charlie Zwick, Chameleon released their debut music video for “Anthem.” Their single is scheduled for release at the end of August via iTunes and other online music stores. Their follow-up EP is expected for a fall 2013 release.

Director Jimmy Negron successfully delivers the sound and unique creative ability of Chameleon’s stage presence in the video “Anthem.” The song is powerful and Lowery’s vocals are simply endearing. Strong guitar riffs carry the tune to halting verses and choruses, and as viewers we can do nothing but sit back in awe as we witness the full command of Chameleon roaming the streets and neighborhoods of NYC. “Anthem” is a song that takes on its own meaning, and Lowery and Ross have the ability to make it shine throughout the scenes of the video. And, as they say, “put your money where your mouth is”…..

Chameleon holds talent within the palms of their hands, and the new video for “Anthem” will leave all of us on the edge of our seats! For more information on this exciting new band, please contact Andy Gesner and the HIP Video Promo staff at (732)-613-1779 or email us at info@HIPVideoPromo.com .