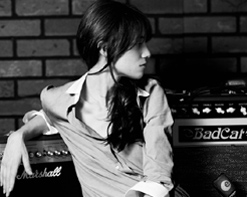 Greetings programmer pals! It’s Andy and the staff from HIP Video Promo, here with a follow-up clip from a provocative artist making waves on both sides of the Atlantic, and a videomaker with a stupendous track record of classic clips to his name. Some musician-director collaborations are so appropriate that we’re only amazed when they don’t happen. Such is the pairing between the sultry and amazingly photogenic Charlotte Gainsbourg and fashion photographer Jean-Baptiste Mondino, a man responsible for some of the sexiest music videos ever shot. Mondino made “Justify My Love” and “Human Nature” for Madonna, “If That’s Your Boyfriend (He Wasn’t Last Night)” for Me’Shell Ndege’ocello, “Buddy X” and “Manchild” for Neneh Cherry; he’s teased expressive performances out of French pop stars like Zazie and Mirwais; and his moody clip for “The Boys Of Summer” is arguably one of the most seminal and unforgettable things ever to air on MTV. Mondino makes videos that look like fashion shoots – he knows how to light up a face to expose beauty and vulnerability, passion, peculiarity and longing – and in Gainsbourg, he’s found a subject worthy of his lens.

Millions of Americans know Charlotte Gainsbourg from her dazzling movie performances – and, with her turn in Bob Dylan biopic I’m Not There and a co-starring role in the latest James Ivory production on the horizon, her screen-notoriety is set to expand further. Meanwhile,5:55, her latest album, continues to sell briskly in America, and it’s already gone triple-platinum in her native France. As with most of the songs on 5:55, Jarvis Cocker provided the witty, pained lyrics to “The Operation”, and Nicolas Godin and Jean-Benoit Dunckel contributed music. But it’s Charlotte Gainsbourg’s own voice, soaked in late-night longing and urbane cool, that truly brings the track to life.

Mondino’s trippy, erotic clip for “The Operation” takes advantage of Gainsbourg’s command of the camera – and her striking good looks. It opens with a shot of the singer against a black background, her long hair spilling out and over her leather jacket. She doesn’t look up at the lens; instead, she sways her head side to side as she sings, as if she’s in a trance. Suddenly, there’s two of her – another Charlotte Gainsbourg, translucent, shakes her head in the opposite direction. Male hands appear from outside the frame and stroke her cheeks and hair. These are lover’s hands, and she continues to sing, even as she responds to their touch.

Then the director shows us the paramour: a shirtless young man, staring back at Charlotte Gainsbourg, and looking every bit as much of a pin-up model as she does. He reaches for her, but his hands pass through her as if she isn’t there. Either she is insubstantial or he is – and when he opens his mouth to sing, he does so in her voice. Her face bleeds into his, and it no longer becomes clear whose imagination we are occupying. For much of the video, they face each other, but phantom versions of Gainsbourg continue to peel away from the real singer. This is the Mondino signature: he makes these fantasies seem simultaneously palpable and otherworldly, and under his lens, the human need for sexual connection becomes both undeniable and fraught with complications.

Any opportunity for us to work with VICE Records is always a complete pleasure, and the Charlotte Gainsbourg “The Operation” campaign is no exception. If you’re in the mood to satiate your crave for Gainsbourg’s latest album 5:55, please don’t hesitate to let us know and we’ll send a copy your way. If you need more info, call Andy Gesner at 732-613-1779 or e-mail us at info@HIPVideoPromo.com.

For info about Charlotte Gainsbourg’s previous video, “The Songs That We Sing” click HERE