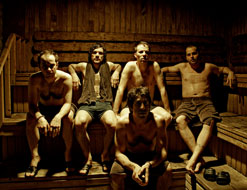 Hello cherished programming friends, it’s Andy Gesner and the HIP Video Promo staff, bringing you a brand new video from one of the indie rock world’s most buzzed about artists in 2010. The folks over at Warp Records have continuously delivered some infectious videos over the last year – from Born Ruffians “What To Say” to The Hundred In The Hands’ wildly successful “Pigeons” and “Tom Tom.” Up next is a video that only proves Warp can do no wrong. This comes courtesy of !!! (preferably pronounced “Chk Chk Chk,” thjough the band maintains it can be pronounced as any sound repeated three times) and their brand new video for “Jamie, My Intentions Are Bass.”

Here, you’ve got a band that simply does not take themselves too seriously and a video that showcases just that. Right off the bat, you get a sense of !!!’s creativity with the credits rolling in via being imprinted on a girl’s apron and the flower pot that she is holding. You see various members of !!! setting up for a photoshoot surely not to be missed while frontman Nic Offer transitions from a flower garden to the studio by breaking through a doorframe seemingly lined with tissue paper. He then meets Jamie and pines for her, chasing her throughout the video in an attempt to put his flower into her vase – literally and symbolically. The hilarious sexual innuendo is hard to ignore, especially with the climactic ending where Nic and Jamie finally cross paths (with animated flowers, no less), and he finally accomplishes his mission.

The video for “Jamie, My Intentions Are Bass” is just a taste of the kind of satire !!! pairs with their catchy, dance-punk sound. And they know exactly what they’re doing and how to do it right, too. !!!, who originally formed in Sacramento, CA, has been around since 1996 and has maintained that unruly demeanor from the start while putting out some of the most funk-filled tunes.

“Jamie, My Intentions Are Bass” is off of !!!’s fourth full-length album, Stranger Weather, Isn’t It? The album is filled with even more dance anthems, which should come as no surprise as LCD Soundsystem contributor Eric Broucek produced it. The Guardian simply lauded !!!’s latest: “On this fourth album, their answer has been a sojourn in Berlin to ‘mainline the city’s dark energy.’ When they make good on this intent, via deeper, clubbier cuts such as ‘The Hammer,’ it’s thrilling. Back on funkier ground, however, grooves such as ‘Jamie, My Intentions Are Bass’ are pleasantly fidgety but nondescript. A mixed bag, then, which nevertheless proves there’s still some gas in the tank.”

Big thanks to the Warp Records team for bring us another winning video, for sure. We’d love to hook you up with some copies of Strange Weather, Isn’t It? for you and any on-air contests you can run in support of this band. If you need more info, call Andy Gesner at 732-613-1779 or e-mail us at info@HIPVideoPromo.com . You can also visit www.HIPVideoPromo.com, www.Warp.net or www.ChkChkChk.net to get more info on !!!.