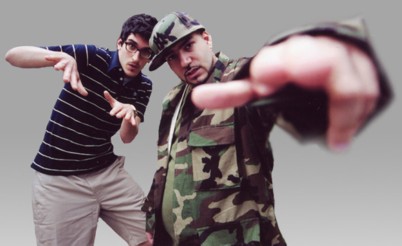 Hello, everybody! This is Andy Gesner and the staff from HIP Video Promo, here to give you a heads up on another great new independent act. We hesitate to call Chromeo a band, since they’re a duo, and they work in a tradition where the operative relationship is between producer and singer, or beat arranger and songwriter. Yet Chromeoauteurs Dave One and Pee Thug have such a tight relationship – both on and off camera – that they radiate the camaraderie and chemistry of performing bandmates. Theirs may be a willfully synthetic act, but the interpersonal alchemy is very real.

In an era of Eighties revivalism, Chromeo are note-perfect revisionists. Their synthesized confections sound like slices of Reagan-era pop-funk – New Power Generation grooves over Vince Clarke beats. Danceable, hedonistic, playful-with-a-lecherous-leer,She’s In Control is an intoxicating party record that is as appropriate to the boudoir as it is to the disco floor. The drum machines splash, the synth bass lines percolate, the vocoders sound sleazy-robotic, and the casual but knowing voice of Dave One dispenses club wisdom and overt come-ons. Chromeo has managed to conjure the bass-slapping, synth-bending, snare-cracking spirit of Eighties funk, and, like Daft Punk, they’re capable of refashioning it for modern audiences, and presenting it with a (mostly) straight face.

The “Needy Girl” clip opens in a dark basement studio – not particularly seedy, but certainly unglamorous and purely functional. But once Chromeo flicks the switches on their instruments, the space is transformed: a sleek, white video set literally pours down from the ceiling. Dave and Pee are changed men as well – their drab threads are replaced by gleaming white t-shirts, jackets, and shoes. The basement has become an abstract classical Italianate garden, complete with croquet, busts, ceramic flowers, and even break dancing statues. The fantasy deepens as Chromeo develops a Midas touch – their microphones and keys on the synthesizer turn to gold as they are manipulated or sung into.

The phantasmagoria is shattered by the “Needy Girl” of the title. She calls Dave on his cell phone, stopping the song and forcing the room to revert to its original state. Her demands push Dave and Pee Thug out of their reverie (and togetherness), and although we don’t hear her voice, her requirements keep the track on hold for a few moments. The moment Dave dispenses with the girlfriend, the song and its accompanying set of images comes crashing back in – culminating in a crowning shot of the two Chromeo members seated like impassive royalty on lounge chairs, fanned by marble angels. Far away from the demands of needy girls, the boys of Chromeo rule as mafioso kingpins of their own private, musically-generated universe.

Throughout, the clip revives camera techniques most associated with the video style of the mid-eighties. The break dancing statue is viewed through a prismatic filter similar to those used in old A-Ha clips, and Dave One is frequently shot through glitter and gauze. When the camera pulls back to let Pee Thug take a slapped-and-popped bass solo, it’s done with the utmost period specificity. The structural integrity and architectural detail of the Chromeo fantasy is never in question: these guys know their sources.

VICE Recordings and HIP Video Promo are proud to present the “HIP Add-VICE” contest. Any programmer that adds the Chromeo “Needy Girl” video during themonths of July or August will be entered in a drawing to win a super cool VICE Prize Package. The package will include copies of She’s In Control, copies of Limited-edition UK Stills singles and autographedLogic Will Break Your Heart LPs, music from new VICE signings Panthers, Vietnam and Death From Above 1979, Yes NYdiscs, a Triple 5 Soul DJ bag and copies of the critically acclaimed VICE Magazine. The drawing will take place August 31st. If you need more info call Andy Gesner at 732-613-1779, or email info@HIPVideoPromo.com. You can also use the link below to visit the Chromeo official site.