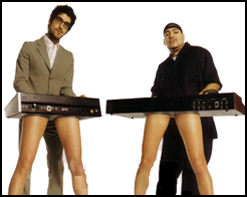 Hello to all of my music video pals! It’s Andy Gesner and the staff here at HIP Video Promo, back with another cool clip from a pair of NYC’s favorite sons. When last we saw a video from the guys in Chromeo, they were turning their home studio into a monument to opulence, and dodging the demands of interfering “Needy Girls”. Dave One and Pee Thug gave us a glimpse into a rich, insular world built around their musical and personal connections. Dressed stylishly, and surrounded by luxury, the fantasy generated by their rich sound was tangible, but permeable, nonetheless – a cell phone call from a demanding girlfriend was enough to make it dissipate. The Montreal duo is aware of both the impermanence of their image and the amount of effort that it takes to keep the fabrication aloft.

But then for a duo who’ve admitted that they don’t know very much about contemporary electronica or club music, Chromeo makes remarkably booty-shaking records. Years crafting hip-hop tracks for Montreal’s most prominent rappers have taught Dave One and Pee Thug how to get drums to jump, synthesizers to squeal, bass to growl, and vocoders to transform everyday speech into the robotic language of space funk. There’s no ironic detachment in their dance-rock: just love for Prince, Mantronix, Whodini, the Ghostbusters theme, “White Lines”, Eighties dance floor glitz and old-school splash. She’s In Control, the Chromeo debut, takes its cues from classic hip-hop and R&B and adds analog modeling synthesizers, slap bass, a few creative samples, and voice-effects to well-constructed pop songs about young lust, hot nights, crossed wires, and breakups.

“Rage” is the angriest song on the album. It’s a song about a relationship on the ropes, betrayal, and dishonesty, and it’s delivered with a legitimate passion that’s rarely heard in dance-pop. But rather than culminating in a punk scream, it builds to a vocodered-out chorus that manages to be more threatening and strange than any feral shout could ever hope to be. Dave One intones the verses in his animated, talky delivery, and Pee Thug contributes the synthesized chorus; as always, they work together perfectly, each member of the duo complementing the personality of his partner.

Like the “Needy Girl” clip, the video for “Rage” is a bright and glitzy club-music fantasia; magic realism with a drum machine. But this time, the illusion isn’t shattered. Instead, the diamond-lit dream progresses unbroken. Here, Dave One and Pee Thug are backed by a band – but on closer inspection, it’s revealed that the supporting group is simply the two members of Chromeo playing different instruments. Dave One handles the kit (electronic drum pads, of course) and the V-guitar, and Pee Thug takes care of the slapped bass and the synthesizers. Electric lights hang like jewels behind the performers, sparkling off of the instruments, the microphones, and Pee Thug’s gleaming grill. At the end of the video, overcome by rage, the synthesist levitates straight up to the ceiling, as Dave One watches in astonishment.

It’s always an extreme joy to work with the crew at VICE, and we are very excited to bring you second clip from this eclectic act. If you need more info, call Andy Gesner at (732) 613-1779, or email info@HIPVideoPromo.com.