The Churchills “I’m A Sucker For A Girl In Uniform” 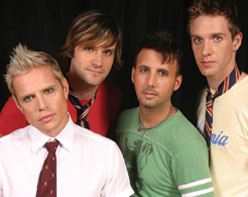 Ladies and Gentlemen of the video world, it’s Andy Gesner and the staff from HIP Video Promo bringing you a brazen new clip that is as infectiously poppy as it is tongue-in-cheek! Who says that the political season ends right at the end of a national election cycle? Brooklyn based rockers, The Churchills understand that with news sources being so plentiful – and current events so inescapable and all consuming – that the conversation about topical subjects never ends. Now, in an utterly undeniable clip featuring genuinely controversial images pulled from contemporary headlines, they have illustrated that very aesthetic.

At first, irreverent director Jonathan Kesselman (The Hebrew Hammer) and the radio-friendly Churchills might seem like an incongruous pairing. But that’s to ignore the discontent and cynicism that has always been bubbling under the surface of the Churchills’ irresistible melodies. While they may be known for having provided outstanding accompanying songs for hit television programs (Scrubs,The Sopranos, ER, Everwood, and Summerland, along with many others), The Churchills’ music has also become the soundtrack to the lives of countless adolescents and young adults trying to make sense of a confusing and ever-destabilizing world.

The Odds Of Winning, their critically acclaimed CD, is a collection of infectious, hook-laden, immediately winning radio-ready pop-rock, but it is not, overall, a happy album. Songwriters Ron Haney and Bart Schoudel sing frankly about depression, frustrated expectations, romantic entanglements, and good aspirations gone wrong. The lead single “Sometimes Your Best Isn’t Good Enough” is one of the most immediate pieces of power pop released in 2005; it’s also one of the most desperate. With its giant, garage-rock riff and Haney’s sugar-sweet vocals, “I’m A Sucker For A Girl In Uniform”, the follow-up, is no less undeniable. The narrative has hints of S&M and submission to violence, and hides a dangerous subtext behind its playful lyrics.

Kesselman, a director known for taking chances and playing with audience expectation, drags that subtext out in the open. His clip for “I’m A Sucker For A Girl In Uniform” is brave and unconventional, and dares to venture where few music videos do. The Churchills’ desire to make a statement is apparent in the first shot: the band, dressed in suits and ties like budding politicians, play their song in front of the giant American flag used in the movie Patton. At the bottom of the screen, a faux-stock ticker affixes imaginary trade prices to abstract commodities like bloodlust, compassion and porn downloads. As you might imagine, everything bad is up, and everything good is down.

If Kesselman and the Churchills had simply left it at that, it’d still be a pretty powerful clip. But they decided to push it farther, and in so doing, they’ve made one of the most remarkably polemical videos of any season. Taking their cue from the song’s lyrical suggestions of submission, Kesselman has recreated some of the famous images from Abu Ghraib – the human pyramid, the prisoner with his arms splayed and head covered. By turning the “Girl In Uniform” into Lyndie England, the group makes the masochism of the song’s sentiment explicit. Sure enough, when the masks are lifted from the heads of the torture victims, it’s the Churchills, bruised and battered, but ready to rock. We then realize our brave heroes have merely been partaking in an S&M role playing game at a sex club; soon emerging victorious and satisfied into the bright lights of early morning, unscathed.

We are so excited to once again get the opportunity to work with our hometown heroes The Churchills on this, their latest and certainly most irreverant, eye-catching clip. Always ready to hit the road, the guys will be available for interviews and video ID’s in select markets. We will also have a limited number of copies of The Odds Of Winning for on-air giveaways. If you need more info, call Andy Gesner at 732-613-1779 or e-mail us at info@HIPVideoPromo.com.