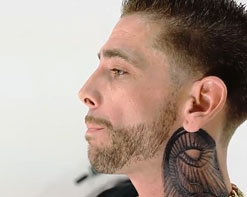 Sacramento’s City Boy is an artist that delves into multiple genres including R&B, reggae, and even pop accessibility, but his strengths and passion has always laid deep in the world of rap and hip hop.

With several mixtapes under his belt and collaborations with such artists as I2W, Messy Jesse and MakStevens from Main Attraction, City Boy has been rocking the mic with reckless abandon, making a name for himself in the Sac Underground scene.

His unapologetic approach to making music has manifested itself into two stellar new videos that shows City Boy flexing his musical musical muscle. The variety of influences he references are on full display in both videos. “Calm Down” bumps like a bonafide club hit with an unabashed energy, while “Oh No (Don’t Do It)” pulls more from the laid back vibes of the reggae side of his catalog.

For the “Calm Down” video, City Boy enlists his crew to delivering a scorcher of a video. He and his posse set up shop in front of simple white room with nothing more than a meticulous Harley in frame. City Boy works the camera as the girls work the bike, and the party is in full effect. Splice into the footage is shots of City Boy at the tattoo parlor, getting inked up before our very eyes. If this isn’t dedication to his art, we don’t know what is.

“Oh No (Don’t Do It)” is a slow burn of a video. Figuratively and literally speaking. It begins with City Boy and a pair of sassy ladies on a city rooftop taking in the sun, which then moves down to the city streets where his squad grows. Shot in black and white, the pace is measured and deliberately slow. It serves as the perfect compliment to the rhymes and lines City Boy fires off at an absolutely blistering speed. City Boy and his girls find themselves alone once again on the rooftop and a generously rolled treat is lit up and passed around. It’s all about the chill and the relaxed vibe built around the exceptional flow of City Boy.

We’re all very excited to be working with City Boy to bring his killer new videos to a wider audience. Please feel free to contact Andy Gesner and the HIP Video Promo team at (732)-613-1779 or email us at info@HIPVideoPromo.com . You can also visit http://www.Facebook.com/CityBoy198888/ for more info.