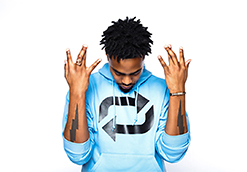 Newport News, Virginia is known for being the home of legendary athletes like Allen Iverson – but one thing it’s not known for is music. Growing up as “a product of the hood” in the city’s downtown area, Clayt’s surroundings were far from inspiring. But even so, he developed a passion for music, and with his artistry and strong imagination, clearly envisioned and pursued success.

But in 2014, after making a name for himself locally, Clayt made a life-changing decision to move to Atlanta, Georgia. There, he found a fresh start in one of hip-hop’s hottest cities. He now strives to use themes of art in his writing, sharing positive influences with youth. Representing the Mutant World collective, Clayt is a true hometown hero, and believes that if we are able to make people more comfortable with their gifts and ideas, we can not only save dreams, we can save lives

Now, Clayt is sharing with the world his music video for “Things I Gotta Say”. Directed by Cinematic B and codirected by Clayt, the emotions are clear. Based around the opening line of the song – “When we link, it’s just like I dsappear” – the video begins with Clayt embracing his girl just outside his front door; inside, they warp into a different scene. Pink lights and green laser beams represent their connection and energy together, showing that when they’re together, they’re truly in their own world. Clayt says about the video, “’Things I Gotta Say’ is about telling someone how you feel but it’s definitely not your typical love song. That’s why I dig it so much. I think it’s one of those songs women will love but at the same time guys won’t feel corny saying the words. Everybody can relate and enjoy it.”

We’re stoked to team up with an inspiring talent like Clayt to share “Things I Gotta Say” with the world. Please get in touch to let us know what we can do to help get this video into your programming. Please contact Andy Gesner and the HIP Video Promo staff at (732)-613-1779, email us at info@HIPVideoPromo.com.