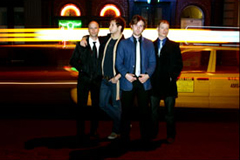 Hello to all my friends in the music video world. It’s Andy Gesner and the rockin’ staff at HIP Video Promo, back once more with a terrific video from a band on the verge of a major breakthrough. Some songs arrive with an aura of destiny about them; inevitable and undeniable, they just feel like hits. “Hey Now Now” by The Cloud Room is such a song. In this balmy late spring, the entire city of New York seems to have this number in heavy iPod rotation, and it won’t be long until the rest of the nation follows suit.

But don’t take our word for it – just listen to the plaudits in the hipster press. “[Hey Now Now]…a great single with a great chorus that breathes new life into the new New York new wave.” raves CMJ, praising its vibrant sound and performances “all delivered so infectiously it’s near delirium.” Spin magazine says, “Over ahhhhs that bleed like watercolos, these Brooklynites play swirling synthed up guitar pop for wistful folks…” and PopMatters crows that “in the race to be the next big thing, The Cloud Room is about to give Bloc Party and The Dears a run for their money.” Even the notoriously fickle and divisive Gotham bloggers are nearly unanimous: The Cloud Room are now the New York band to watch.

J, a frontman so stylish he only needs one letter, discharges “Hey Now Now” with big-city panache. More tuneful and powerful than Paul Banks or Julian Casablancas, his is the New York City voice of the moment – warmly alien at times like Bowie during his Berlin period, and with a cool, effortless upper register. The Cloud Room alternates between Numan-esque new-wave, L.E.S. dance-rock of the Rapture/Franz Ferdinand school, and red hot indie rave-up that are surprisingly emotional by detached NYC standards. Throw in a band that can conjure up memories of Echo & The Bunnymen and the Psychedelic Furs with equal skill, and it’s not difficult to figure out why The Cloud Room is setting the city abuzz.

For a bunch of sharp dressers who look the part of budding Brooklyn superstars, The Cloud Room don’t bother to do much posing for the videographer’s lens in the engaging video for “Hey Now Now”. Instead, they let typical New Yorkers handle the task of singing to the camera. After cars, trucks, and pedestrians streak through the Manhattan streets in some of the most frantic time-lapse photography you’ll ever see, the footage slows down to track the daily activity of chess players, joggers, office-workers, Fau Lun Gong members, and kids on their way to school. Everybody thus captured is doing the same thing: they’re all mouthing the words to “Hey Now Now”. An officious-looking middle-aged businesswoman intones the second verse into her cell phone with the gravity of a stockbroker negotiating a deal; later, she’s relieved by a young couple on a park bench who are singing to each other in the course of a lover’s quarrel. Occasionally, the camera cuts away to quick shots of The Cloud Room onstage, but it isn’t until the end of the video that we’re shown the band in performance. The camera swings into the audience, where, as a matter of course, everybody is singing along. Thus, the clip at once celebrates and pokes fun at the song’s current ubiquity in the city – but this is a joke that, amusing as it is, isn’t too far from the truth.

We’re very excited to be working with Elissa Young and the Gigantic Music team to bring you this uplifting new clip. We have plenty of copies of The Cloud Room if you are interested in setting up on-air giveaways for your viewers. The Cloud Room will be touring with Benzos throughout the month of July, so if you would like to set up a video interview or get a video ID, we would be thrilled to make it happen. If you need more info call Andy Gesner at 732-613-1779, or email info@HIPVideoPromo.com.