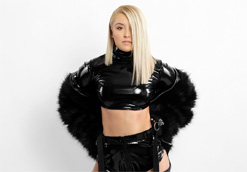 Who is C’Marie? Born in Illinois and raised in California, Carly Marie Masten is an American singer, dancer, and songwriter. She began developing her dance skills at the age of 2, winning multiple national championships and dance scholarships from major dance conventions. She’s worked with choreographers like Dave Scott – for whom she danced in numerous music videos for Mindless Behavior, Brian Freidman, and Cris Judd, and appeared on popular TV shows like Ellen, X Factor, and Nickelodeon programs.

But upon moving to LA, C’Marie decided to focus her career on developing her music and singing skills. She’s been singing since the age of 12, starting her career after joining Ace Young’s girl group Code 5, who then became Paperdolzz, and has worked with prominent vocal coaches like Tim Carter, Melodye Perry, David Kidd, Yunga Bonner, Dave Stroud, and Ben Bram. C’Marie has been a featured artist on songs written and produced by Harvey Mason, JQ Smith of the Underdogs, and promoted by Walter Milsap III. The Paperdolzz group performed the National Anthem at the Philadelphia 76ers, Chicago Bulls, and UCLA men’s basketball games.

As a solo artist, C’Marie has performed at venues across LA and has worked with the likes of Tim Carter, Alex Teamer, Myles Parrish, ChuckieG, Corey Mekell, and David Kidd, recording covers, writing and producing her songs with music videos by Cam Fairfax, and Phoenix Rising Films. She’s recorded covers by Rihanna (a major influence on her tropical pop/R&B sound, as well as her style), gnash, and SZA, as well as original songs. For her original music, she has tracks featuring Corey Mekell and Myles Parrish, and has one track written and produced by Harvey Mason and J.Que Smith, featuring artist Ty Dolla $ign.

Now, C’Marie has created an album with A1. They’d initially planned to record five songs, for an EP but they clicked so well they decided it was time to make an album- which they did in only four days. The new single was written by A1, but it’s a relatable story of finding someone that’s nice to you so you can give that back. Though C’Marie lives in Los Angeles, she flew out to Seattle for a change of scenery, where she met up with her co-star. The “Be Nice” video, which was directed by BenMarc (A1’s partner in their label that C’Marie is signed to), shows C’Marie and her boo treating each other well, and creating a love that will last.

It’s a pleasure to work with a promising artist like C’Marie to help share her music with the world. Please let us know what we can do to get the “Be Nice” included in your regular programming and online presentations, or if you’d like us to send some merch for on-air contests and giveaways. C’Marie will be touring with T-Pain and B2K this spring. Contact Andy Gesner and the HIP Video Promo team at (732)-613-1779, email us at info@HIPVideoPromo.com for more info on C’Marie and all her upcoming tour dates.