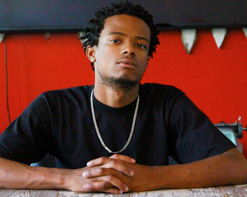 We are excited to bring you Con and his newest video, “Free Dreams.” Venturing into solo artistry for the first time in his musical career, Con is a killer, imaginative voice coming straight out of the St. Louis music scene. With his honest, merciless lyrics that deliver a deep and serious message backed behind a magnetic track, Con is the artist to look out for this year. As a young leader in today’s thriving “DIY” community, his musical mastermind transcends easily across a number of genres, often birthing what most profoundly consider the explicit emerging sounds of tomorrow. It’s safe to say that Con is a force to be reckoned with. This is quite obvious in his newest hit, “Free Dreams.” Con’s music is equipped with a true experience you don’t want to miss out on.

You can find Con on Charter OnDemand, the Source, and DJ Booth. He has shared the stage with artists such as Montana of 300, Trill Sammy, AbSoul, Chance The Rapper, Travis Scott, Alex Wiley, GEazy, Blu, Slum Village, SOMO, and Nitty Scott.He is a solo artist from the collective MME which is a self-sufficient dynamo of an indie musical collective hailing from the city of St. Louis, Missouri. MME also brought us the electrifying Mvstermind and his “Mali Moolah” video in 2016. Con continues to work on various solo projects that will be released within the near future.

“Free Dreams” is a song reminiscent of the rappers of the 90’s such as Coolio and Public Enemy. Soaked with rhythms all his own and a lyrically substantial sermon, “Free Dreams” delivers a message about rising from the ashes of ancestors’ past and coming out on top to make something out the struggles that have been faced. This tale deals with the Black American Narrative of dignity, confidence, and distributing success across the culture.

Profoundly influenced by African-American Muslim minister and activist, Malcolm X, the video for “Free Dreams” opens with a sound clip from a conversation between Malcolm X and Brother Baines, as seen in Spike Lee’s 1992 film, Malcolm X, about the cons and lies African-Americans have been told for centuries in order to keep them from rising up. Unsettling clips showing past struggles in American society throughout the video, mixed in with Con’s venture and experience of his own. Con’s gritty, unwavering chronicle combined with the unshakable track creates a poignant experience bar none for its viewers.

We are always ecstatic to work with new artists, especially when they are as exceptional as Con. Here at HIP Video Promo, Con has introduced to a powerful, unrepentant new sound that we are incredibly eager to share. We’re confident you and your viewers will embrace this video as much as we have, and we are eager to do anything we can on our end to help get it into your programming. Please get in touch with us here at HIP Video Promo at (732)-613-1779 or email us at info@HIPVideoPromo.com. You can also visit  www.A1HustleLLC.com/con for more info on Con.