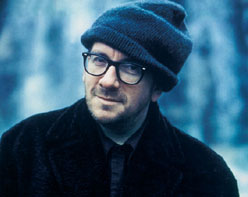 A big hello to all my friends in the music video world! It’s Andy Gesner and the staff from HIP Video Promo, and we’re thrilled almost beyond belief to be working with the artist whom Ira Robbins from Trouser Press memorably and appropriately called the “King Kong” of modern music: Elvis Costello. We’re not exactly sure what Robbins meant by that, but we can guess – Costello the brilliant polymath has been on vivid display over the past few years. His collaborations with Burt Bacharach and Diana Krall have shown his songwriting range, 2003’s gorgeous North showcased his facility for Chet Baker-style jazz singing, and his upcoming concerto will present Costello as an accomplished classical composer. Ranging across the musical landscape, showing up in unexpected places, the protean rocker continues to dazzle at whatever he tries

But with The Delivery Man, his new CD on Lost Highway Records, Elvis Costello has returned to territory that will be familiar to his legions of devoted fans. The album is a fiery fusion of American roots music, R&B, and punk. The songs here feel halfway between the full-on pub-rock sonic knifings of This Year’s Model and the literate, adventurous country-rock of King Of America. Those who know Costello’s amazing reimagining of “Must You Throw Dirt In My Face?” from Kojak Variety will be pleased to hear echoes of that track throughout The Delivery Man – Costello’s country music is bluesy, desperate, feisty, regretful, piteous but cut always with black humor. Lucinda Williams and Emmylou Harris make prominent appearances on the album, but this is Costello’s show – and it’s an elliptical, character-driven, referential novella of a rock and roll album.

“MonkeyTo Man”, a darkly comic R&B shouter, is a highlight of the set. Costello has always been one of the great straight-song singers in rock history – a powerful interpreter and communicator who can invest an outraged humanity in the most confrontational lyrics – and here, he summons forth all the fireworks in his arsenal. Without ever degenerating into mere shouting, Costello coaxes every ounce of bewilderment, shock, and disapproval out of the witty lyric. Backed by the Imposters (the legendary Attractions with the subtle and empathetic Davey Faragher taking the place of Bruce Thomas), Costello renders his scalding performance over a skittering, propulsive, Sixties garage rock groove.

Because he’s best known for his unparalleled songwriting and singing, Elvis Costello’s videos often become afterthoughts. That shouldn’t be. Costello videos are invariably playful, kinetic, and thought-provoking – loaded with in-jokes and moments of revealing comedy – and the “Monkey To Man” clip shows that his visual inventiveness isn’t slowing down at all. If anything, he’s getting even more frantic, more energetic, and more casually hilarious. Cuts come fast and furious, images flit from shot to shot and scene to scene, and Costello – the ringmaster of this wild circus – grins at the camera like a slightly psychotic huckster.

The video begins with titles that look imported from a Fifties jazz record, or perhaps a Hanna-Barbera cartoon: the monkey trial we’re about to watch, we’re told, is presented by “Scopes-I-Tone”. The faux-credits hold for a few seconds before switching to a re-creation of the This Year’s Model cover – but instead of a lascivious-looking Costello behind the tripod, we’re shown a man in a gorilla suit. The star himself appears moments later: he dances down a red-tiled hotel hall with a guitar, swinging his head to the beat, acting out lines, looking every bit the part of the legendary performer. It’s a festive set he’s part of – Costello is surrounded by balloons, jugglers, bright lights, and barefoot dancing girls in bikinis. They’re adorable, and their choreography is period-specific, too: it’s like an episode of Laugh-In, without the freeze-frames.

Yet chaos continually subverts expectation. The gorillas frug assiduously, and the dancers pose like a James Bond poster. A despondent teenager, surrounded by revelry, stares at the camera accusingly. Costello fights off ape-suited musicians in a hotel bathroom. The girls tend an indoor barbecue, and apes work the baccarat table and the Vox Continental. As in Elvis Costello’s music, there’s so much going on that it’s impossible to wrap your mind around all of it in one sitting. It’s an art he’s mastered: intriguing you, drawing you into his encyclopedia of associations, compelling you to go back for a closer look.

Here at HIP we are breathless with anticipation of this exciting fall promotion. Major, major thanks to Retta Harvey and her crew at Lost Highway Records for bringing us on board with this legendary and prolific artist! We do have copies of The Delivery Man CD for everyone who adds this terrific clip, so please get in touch if you’d like to check it out. If you need more info call Andy Gesner at 732-613-1779, or email info@HIPVideoPromo.com. You can also visit Lost Highway Records, or Elvis Costello’s Official Site to find out more about Elvis Costello and the “Monkey To Man” video