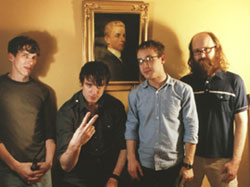 Hello to all my friends in the music video community. It’s Andy Gesner and the staff from HIP Video Promo, back with another superb clip from a band you should know about. As you can imagine, lots of performance videos pass by this desk. We’ve seen musicians address the camera with tremendous kinetic energy, and play so explosively that it seems implausible that the television screen could contain them. But we don’t think we have ever seen shadows perform with such intensity as they do in the clip for “Prevent The World” by Criteria. To be sure, the four members of the group do get screen time – but it’s their silhouettes that really steal the show.

Considering the history and the image of the group, this choice feels oddly appropriate. There’s always been something mysterious and shadowed about Criteria. It isn’t their sound: the quartet plays direct, brash, and colorful rock music, confrontational and bold, and radio-ready as anything currently in rotation on your local modern rock station. And it isn’t Stephen Pedersen’s voice – that’s as clear and unceremonious as a thunderclap, and as bluntly powerful as the thwack of a fist against skin. No, the Criteria mystique has more to do with the way the group has come together, and its relationship to the constantly shifting Omaha music scene and the Saddle Creek family.

Criteria’s first release – the ferocious, critically-heralded, and criminally overlooked En Garde – spun the heads of all the indie listeners who heard it. The online zine Delusions Of Adequacy called it “a ten song powder keg of an album”, and praised its heartfelt lyrics, adrenaline-charged beats, and blazing guitars. But if the name of this band is unknown to you, you’re not alone: the imprint that released the album, Initial Records, once a well respected staple of the underground indie/post-hardcore circuit, closed up shop shortly after the release.

Enter Saddle Creek. Stephen Pedersen already had deep roots in the community that surrounds the legendary indie label: he was an original member of Cursive, recording with them through their second full-length before leaving in 1998 to attend school at Duke University in North Carolina. Criteria bassist A.J. Mogis played in Lullabye For The Working Class (and with his brother, Mike Mogis, has been the engineer and producer on wildly successful Saddle Creek releases ranging from Conor Oberst to The Faint), and drummer Mike Sweeney is a member of Beep Beep and has done sessions for Bright Eyes. Criteria fit the label’s needs perfectly – Saddle Creek hadn’t released a heavy record since Cursive’s Ugly Organ, and here was a seismic rock band with terrific songs, a galvanizing sound, and a charismatic, larger-than-life stage presence.

When We Break is the next step forward from En Garde: fiercer, smarter, and even readier for prime time. “Prevent the World”, the lead single, is an absolute excoriation of Pedersen’s musical milieu, and one delivered with the angry ring of personal experience. It’s a non-conformist’s anthem, an open letter to the music industry, an infectious mouthful of venom. Yet it’s somehow boldly hopeful, too. This video, directed by the Saddle Creek label’s own Jason Kulbel, manages to communicate the band’s desperation, fury, and desire for positive change. When appearing as silhouettes, they leap toward their microphones, slashing away at their guitars. Hot white light streams through the spaces between their instruments and their bodies, and defines their figures with a daring crispness. Then, for the bracing choruses, the band steps out of the shadows and addresses the elevated camera, faces filled with determination and raw intellect.

We are very stoked to be working with our friends in Omaha to bring you this new clip by Saddle Creek’s hard rocking quartet Criteria. Though their new record, When We Break, doesn’t come out until August 23rd, we do have advance copies available for you and your viewers. If you need more info call Andy Gesner at 732-613-1779, or email info@HIPVideoPromo.com. You can also visit www.Saddle-Creek.com.