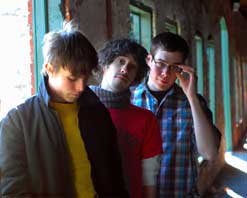 Hello to all of my music video pals! It’s Andy Gesner and the staff from HIP Video Promo with another great clip. Today, we’re excited to be working with our friends from Creep/Blackout Records to spread the word about a terrific young band on the brink of national recognition. The Danger O’s have already established themselves as one of Philadelphia’s most compelling indie acts – and through mySpace and other online sources, their songs have reached an audience far beyond the East Coast cities where they’ve toured. Little Machines, their first official release, has gotten terrific advance notice, and when it hits stores on May 9, we’re anticipating that this Pennsylvania trio will turn heads throughout alt-rock nation.

That’s because Danger O’s are much more than another cookie-cutter hardcore or emo band. Bassist and frontman Justin Johnson is well-schooled in those genres, but his songwriting also incorporates elements from other traditions as well: spiky new wave, late-Seventies classic rock, tightly-constructed indiepop, and even jazz. Johnson is one of those guys who positively bleeds music: he hears connections, harmonies, and rhythmic departures that most others don’t, and his song construction reflects his expansive tastes and unusually sophisticated ear. Emo isn’t usually considered the métier for budding serious songwriters, but Johnson is an exception – he puts the dynamics and the intensity of punk at the service of his melodies.

Consider, for instance, “Dance Dance Revolution Part 2”, the lead single from the Little Machines EP. The band discharges the track with genuine punk energy – but since the song sits atop a monstrous bass groove, it also moves like a radio pop hit. Johnson’s vocals bear the unmistakable stamp of emo urgency, but they’re also extremely tuneful and powerful, and even poised. The Danger O’s play with the infectious recklessness of youth, and it often seems as if the structure of the track is about to fly apart – but upon closer inspection, it’s clear that the song is precisely and carefully structured. In their compositional excellence and their successful balancing of punk abandon and classic songwriting, the Danger O’s put us in mind of another rock trio fronted by a talented bassist: the legendary Police.

Formed in summer 2004, the Danger O’s have become a consistent draw on the Northeast club circuit. They’ll be touring the country in the wake of the Little Machines release, and proving once again that a power trio with a solid bassist can make as many reverberations as any two-guitar rock band. The clip for “Dance Dance Revolution Part 2” introduces Johnson the performer to America: a dynamic, expressive, curly-haired frontman who sings and plays with unflagging confidence. The Danger O’s appear in a club in front of a small but enthusiastic crowd, and the rapport between the members of the trio and their audience is palpable. Elsewhere, the camera catches Johnson in a context that is no doubt familiar to him: the SEPTA rails. As the group rocks on the platform of an exurban stop, the bassist and singer stares out of the window and watches the greenery slide by. He’s alone in the car, possessed by his own thoughts – and the memory of a troubled young woman, waiting, perhaps, for the train to disembark.

Here at HIP we are thrilled to be working with the crew at Creep Records to bring you this clip from a tremendous up and coming band! We have plenty of copies Little Machines for all of your on-air giveaway needs. If you need more info call Andy Gesner at 732-613-1779, or email info@HIPVideoPromo.com.