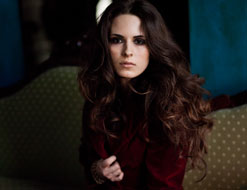 Danielle has been singing since she was five and grew up lending her voice to many different rock groups. She has earned her street-cred the way all rock artists should: by earning opening spots for respected acts like Rusted Root, Saves The Day, Tantric, and later The Cult at the 2009 Sundance Film Festival. 2010 has been a big year for Danielle Barbe and her self-titled debut record has hit the ground running. Already, her music has caught the attention of pop juggernaut Lady GaGa and she has invited her to perform at her Monster Ball Tour after-party in Pittsburgh, PA this September. It also doesn’t hurt that “Ghost Town” was showcased on 45,000 Delta airline flights this past summer. Danielle has also impacted the Hollywood movie universe by having one of her songs featured in the comedy blockbuster “Vampires Suck” (from the director and producer of the Scary Movie franchise). When it comes to touring, Danielle is no stranger to the road either as she recently wrapped up her touring run with the band Fuel.

Danielle Barbe is a rock n’ roll heart through and through, and it’s evident from the first few seconds of “Ghost Town.” Barbe states that “Ghost Town is about being stuck in a wasteland of a town and feeling the color just drain out of everything. You start to worry it’s going to affect you. Ultimately, it’s the realization that the only remedy is to find a way to get out and move on with your life.” This atmosphere invades the camera as Danielle and her band pace a dusty abandoned loft, searching for a way out. This clip is performance centered and Danielle helms the lead singer character with every cell. She is stylish and bold, maintaining the delicate balance of striking beauty and edgy attitude. Regardless of your gender, it’s hard to find something not to like about Danielle Barbe when her energy is so undeniable.

The young rocker will be living out her dreams this fall as she hits the road opening up for The Gracious Few, and we couldn’t be happier to see her get this shot. In our minds, it’s always so refreshing to see an artist who is gaining momentum through touring and performing live. “Ghost Town” is certainly radio friendly, but like any real rock song, is meant to be cranked up to eleven on stage with blood, sweat, and screaming fans.

We are thrilled to bring you this remarkably fresh and undoubtedly talented young act. We know Danielle Barbe will sweep your viewers off their feet. If you would like copies of Danielle’s self-titled album or a chance to interview and see her on tour with The Gracious Few this fall, please let us know and we will make it happen. For more info, call Andy Gesner at (732)-613-1779 or you can visit www.DaniBarbe.com.