David Juliet “Out Of My Head” 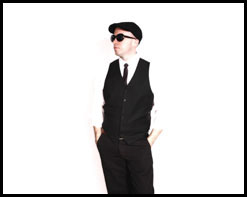 David Juliet’s music blends a vast array of sounds including pop, funk, and alternative genres. HIP Video Promo is proud to present a video from a hot new artist that is just about to burst through the seams of the contemporary music scene. His debut album titled Variations has been receiving much critical acclaim, and includes the single of his latest music video “Out of My Head.”

David Juliet is a pop star on the rise, making music that is monumental and extremely inspiring. Compared to iconic artists as varied as Lou Reed, Bob Dylan and Leonard Cohen, Juliet shows an approach to songwriting and performance that is as unique as it is timeless. He is currently promoting his highly acclaimed debut album Variations released on Concerthouse/Blue Pie Records. The record has been receiving high praise, and with an ever-growing fanbase, Juliet is sure to have a great year in music.

This artist is teeming with potential—he has recently been nominated for a New Artist of the Year award that will be featured within New Music Weekly Magazine, as well as Best Male Mainstream Artist, and Favorite International Mainstream Artist by the Independent Music Network. Songs from his debut album Variations have been featured on radio stations across the nation, various Internet radio stations, select podcasts, and has also been featured in write-ups throughout a number of magazines. Variations is available for download on iTunes, and from the debut album, his newest video clip “Out of My Head” offers a fresh perspective on the creation of David Juliet’s musical genius.

The video captures this artist in a flattering light as he plays in a dimly lit bar for a young woman. The first scene of “Out of My Head” includes a close-up of the woman’s lips as she puffs away on a cigarette; she then stomps it out and goes into a bar where David Juliet plays his song solely for her. As he performs with a full band, he taunts and leads her on with his soulful and creative approach to music. Just as the song ends, the young woman follows him, proving to viewers that his music is impossible to resist!

With the presentation of his debut album Variations, David Juliet has been receiving nothing but positive feedback, and with his newest video “Out of My Head,” he is sure to gain more fans and recognition. His music is exactly what the contemporary music scene needs, combining a vast array of different musical genres into an unmistakable brand of pop that is sure to mesmerize and inspire music fans from all over. For more information on this fresh, new artist, please contact Andy Gesner and the HIP Video Promo staff at (732)-613-1779 or email us at info@HIPVideoPromo.com . You can also visit www.DavidJuliet.com.