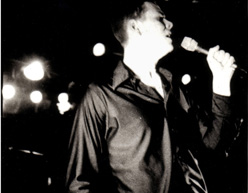 Hello music video lovers across the country! It’s Andy Gesner and the staff from HIP Video Promo, back with another terrific clip from an act that will soon be a household name. When Baby Dayliner shows up in concert with nothing but a smile and a suitcase filled with gear and backing tracks, audiences don’t always know what to think. But the minute he pushes the‘start’ button and launches into one of his madly catchy, wildly romantic, and rhythmically explosive tracks, he transforms even the most jaded crowd into screaming, hollering, gyrating true believers. That sounds like hyperbole, sure: but here in the New York area, we know it’s the literal truth. We’ve seen it over and over – audiences wowed and inspired by his magnetism, his singing and songwriting talent, his enthusiasm, and his formidable intelligence in action.

High Heart and Low Estate, his full-length debut, may not be the best-known album from the Brooklyn electro-pop revival, but none are better-written, or better-loved by those who heard it. Baby Dayliner found the missing link between classic hip-hop, The Magnetic Fields’69 Love Songs, and Morrissey’s most heartbreaking lyricism. His classic croon and infectious melodies helped place it on many “Best of 2004” lists. Critics Pass Away, the follow-up album, is tighter, brighter, and even smarter: Baby Dayliner’s reflections on relationships and urban life have never been more incisive. He sets scenes like an essayist, draws characters like a short story writer, and then inhabits it all with an instantly identifiable voice that is both warm and immediately winning.

“Silent Places,” long a concert favorite, sounds like 4AD music as it might be re-imagined by a top-flight rap producer. With typically-literate images and irresistible beats, the single presents Baby Dayliner as reflective and maybe even a little caustic, but also more than ready to swing. Like many of the songs on Critics Pass Away, “Silent Places” can be heard as a pure party cut; it’s propulsive and danceable, even as it makes you think.

Though his reputation has spread across the indiepop underground, Baby Dayliner is very much a product of the New York music scene: DJing twice a week at Pianos, playing sold-out shows at the Mercury Lounge, and enlivening parties across the five boroughs with his charisma. Daniel Bloomberg’s clip for “Silent Places” is set at such a party– a typically stylish gathering, complete with hip celebrities. Adrian Grenier of Entourage is hanging out here, as is Damien Paris of The Giraffes, and the Siam Cats’s Stan Blackett. But nobody is enjoying themselves until Baby Dayliner walks in with his magic suitcase. He opens it, turns the key on a box marked ‘joy,’ and suddenly the dance floor is alive with revelry.

As a metaphor for what happens at a Baby Dayliner show, it couldn’t be more appropriate. But director Bloomberg throws in a wrinkle: a young woman with designs on the singer himself. In the middle of the dance, the floor suddenly goes dead – and when he goes to investigate (there’s a fascinating magical-realist shot of his eyes peeking through the backs of his hands), he finds that a young blonde has stolen the key. She wants the musician’s attention. He does his duty and starts the party going again, but the last thing we see is the tall figure of Baby Dayliner leaving the apartment with the blonde close behind him.

It is with utmost joy and appreciation that we have the opportunity to work together with Alec Hanley Bemis and all of the folks at Brassland, to bring you this video from such a deserving artist. Baby Dayliner will be starting a nationwide tour this fall with Mobius Band and former labelmates The National. We would love to set up a video interview for you with this up and coming star when he visits your market. We’ll also have copies of Critics Pass Away available for all of your on-air giveaway needs, so don’t hesitate to be in touch. If you need more info call Andy Gesner at 732-613-1779, or email HIPVidea@aol.com. You can also visit www.Brassland.org or www.BabyDayliner.com to find out more about Baby Dayliner.