Death Cab For Cutie “The Sound Of Settling” 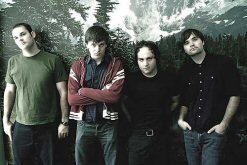 Hey, everybody! It’s Andy Gesner and the staff here at HIP Video with another terrific video for your viewing enjoyment. Just before the holiday season, we were thrilled to be able to bring you “The New Year” video from Seattle-based indie rock giants Death Cab For Cutie. Thanks in no small measure to your enthusiastic support, that video enjoyed considerable success. Now, in cooperation with the wonderful folks at Barsuk Records, we are equally stoked to bring you the eagerly awaited follow-up video from the CD Transatlanticism.

The new video from Death Cab For Cutie, “The Sound of Settling” is a marked departure from their previous effort, “The New Year”. While “New Year” was almost epic in its cinematic approach, “Sound” is much more homey and intimate. There is only one setting, a curtained stage with a frame on an easel. Using a technique similar to video feedback, the band members and a sizeable cast of colorfully costumed extras are successively drawn into the small frame as the next one is revealed in the larger one. The extra cast includes tall-hatted, white jacketed chefs, pom pom shaking cheerleaders, a partier with a lampshade on his head, even a giant gingerbread man. Another departure from the video norm is the complete absence of edits in the usual sense, all the transitions being acomplished via shifting the framing. This is the work of Tomorrow’s Brightest Minds (The Datsuns, Longwave, Alkaline Trio), whom MTV Magazine numbers among the “Next Gen Video Auteurs” .

Musically the song is quite different, as well. It’s uptempo, bright, and poppy; melody-driven with catchy hooks and tight harmonies (The chorus will be stuck in your head even after only one or two listens) . That’s not to say it’s a cheery tune – Ben Gibbard’s lyrics are as introspective and ambivalent as ever, dealing, in general, with life‘s milestones. The video and the song, though, amply demonstrate the talent, versatility, and impeccable musical craftsmanship of this band. Their towering reputation is obviously well-earned.

Here at HIP Video, as always , we want to see to it that your DCFC needs are seen to in a complete and timely fashion. We’ll have some goodies on hand for giveaways; and, while the band is touring, we’ll be happy to arrange interviews or video IDs when they come to your area.As always you can e mail info@HIPVideoPromo.com or call (732) 613 1779 for details and the latest news.