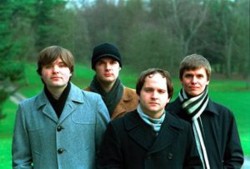 Greetings to all my video programming friends! It’s Andy Gesner and the staff at HIP Video Promo, bringing you another outstanding clip from one of our favorite indie bands. When we’re feeling introspective, there’s no better tonic for our woes than Death Cab For Cutie – and there has been no better DCFC album than the gorgeous, romanticTransatlanticism. Principal songwriter Ben Gibbard has been airing his evocative emotional snapshots for close to a decade. His richly allusive and poetic verses capture those small moments that make huge impact, and his band plays with consummate sensitivity and poise. Tuneful, brilliant, and often majestic, Death Cab For Cutie is without a doubt one of the cornerstones of modern indie rock.

If 1999’s Something About Airplanes was a rude, brash sounding of a new voice, and 2000’s We Have The Facts And We’re Voting Yesintroduced notes of confusion and ambivalence into that voice,Transatlanticism speaks in the clear, hard diction of experience and regret. Soaring, dramatic pieces ebb into quiet, intimate songs with inventiveness and grace, and the laser-like specificity of Gibbard’s language has never been more affecting. Throughout, the Bellingham, Washington four-piece surrounds the rich poetry with music that’s both impassioned and exquisitely played. For a winsome indie-pop quartet, DCFC have become one hell of a musically accomplished combo.

“Title And Registration” is an imagist poem set to music. As Gibbard laces a delicate melody over a guitar figure, he sings a story of shadows: nighttime reveries, car headlights disappearing into the East, meditations on the appropriateness of the name “glove compartment”. His voice is plaintive, questioning, immediately identifiable; when, at the crest of the song, he overdubs a close harmony on the word “collide”, the result is softly transcendent.

Gibbard has often been said to expose his interiority to his audience. Cleverly directed by Patrick Daughters, the clip for “Title And Registration” literalizes this metaphor: the three other members of DCFC are surgeons in a dark operating room, and the earnest frontman is their patient. But there’s nothing gory or bloody about this procedure – when the doctors “cut in” to the supine Gibbard, they find a menagerie of colored lights and delicate papier-mache organs. The singer appears to be made out of childrens’ arts and crafts materials: his skin a soft, cuttable crepe paper, his ribcage strips of white cardboard, his blood red paint, and heart and lungs like Chinese lanterns.

Just as the song imagines a glove compartment as a place to keep secrets, the video imagines the chest cavity as a hidden treasure box. Everything about the operating room contributes to the sense that we’re watching a clandestine undertaking: there are curtains over the windows, the doctors’ implements seem cold and primitive, and the surgeons apprehensive and maybe a bit sinister. Awake, occasionally smiling, and singing through the procedure, Gibbard addresses the camera with trust and geniality. Displacing his “heart” to remove a black, glowing abscess, the surgeons keep the blood flowing with red duct tape and a cheap-looking sphygmometer. Returning the heart to the chassis of Gibbard’s body, the other organs light up all at once; and right in time with the haunting synth solo, too.

This marks the third video HIP Video Promo has championed for Death Cab for Cutie, and we couldn’t be happier with the team behind them. Not only do we have the awesome opportunity to work again with Josh Rosenfeld and Emily Alford of Barsuk, but with DCFC’s major label signing this winter, we also have the pleasure of working with our good friend Diane van Horn at Atlantic Records and her great staff in the NYC offices! We are here for you to make sure that all of you Death Cab for Cutie needs are met in a timely fashion. If you need more info, call Andy Gesner at (732) 613-1779, or email info@HIPVideoPromo.com. You can also visit www.deathcabforcutie.com,www.barsuk.com or www.atlanticrecords.com to find out more about Death Cab For Cutie

For info on Death Cab For Cutie’s video “The Sound of Settling”, click HERE