Death Valley Girls “Disaster (Is What We’re After)” 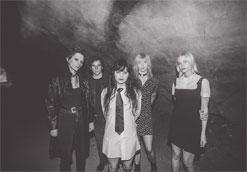 Even among rock stars, Iggy Pop is a legend: he’s the proto-punk, the wild man of post-industrial Michigan, the stage dynamo who made art out of pain, rage, and speed, the Rock and Roll Hall of Famer who remains a defiant outsider. If Iggy Pop likes your music, that’s something to celebrate, because Iggy doesn’t like all that much. Well, Iggy likes the Death Valley Girls – enough to star in their video for “Disaster (Is What We’re After)”, a punk rock burner that owes plenty to the sound and style made famous by the Stooges.

And it’s a pretty safe bet that if you can get Iggy Pop to appear in your clip, the world is going to pay attention. “Disaster (Is What We’re After)” is such a scalding track that music fans were surely going to notice it no matter how the Death Valley Girls chose to promote it – but Iggy’s participation certainly helped speed things up. Rolling Stone featured the video on its website. Pitchfork, Stereogum, NME, Brooklyn Vegan, Revolver: they’ve all had something to say about the filmic collaboration between the Godfather of Punk and some of his most visionary children. Even Eater, the well-respected food website, got in on the action, calling the clip “the perfect recipe for a mid-week diversion”.

Eater? Their featured post makes more sense once you realize what Iggy does in the clip. The rocker sits at a table with a ketchup bottle in front of him, and unwraps and consumes a hamburger from a fast food takeout restaurant. That’s it – and if it looks familiar to you, that’s because it’s a re-creation of a famous segment from Andy Warhol’s experimental 66 Scenes of America. The clip is the creation of 22-year-old Los Angeles filmmaker Kansas Bowling, who was determined to pair the music of the Death Valley Girls with her tribute to the Warhol classic. Iggy Pop’s involvement came to her in a dream – and we’re pleased to announce that her dream came true.

In the video, Iggy Pop dresses, as Andy Warhol did, in American flag colors: tight blue blazer, red tie, white buttoned-down shirt. The set is exactly the same, too – black formica table, white lunch bag, grey background. Even the hamburger hasn’t changed very much in thirty years. But while Warhol seems slightly uncomfortable with the fast food in front of him, Iggy, cool as always, tucks in with enthusiasm. He can’t resist bobbing along to the song. We bet you won’t be able to, either.

Here at HIP, we’re elated to be working with Death Valley Girls to promote the brand new “Disaster (Is What We’re After)” music video with the one-and-only Iggy Pop! We hope you embrace this clip as much as we have and consider including it in your regular programming and online presentations. Rest assured we’ll have plenty of Death Valley Girls merch available for on-air contests and giveaways so don’t hesitate to get in touch. For more information on Death Valley Girls, please contact Andy Gesner and the HIP Video Promo team at (732)-613-1779 or email us at info@HIPVideoPromo.com. Head to facebook.com/deathvalleygirls for more information and the latest updates.