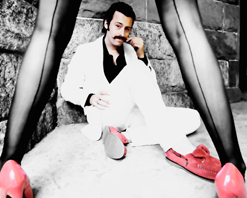 Hello, it’s Andy Gesner and the HIP Video Promo staff, here with a brand new clip from an irreverent Jerseyan with a powerful libido and a sense of humor to match. Tell Jay Della Valle that he’s got a surplus of testosterone, and he won’t flinch – if he didn’t, he wouldn’t have been able to grow the moustache that has become his visual signature and the totem of his giddy traveling tribe of musicians. And in the tradition of great artists with a distinct vision of their craft, he has staked his good name on it, dubbing the band itself Della Valle. Remarkably, the resourceful singer-songwriter has been able to parley his facial hair into something not unlike national recognition: his independently-produced documentary, “The Glorius Mustache Challenge”, has been screened from coast to coast, and has inspired thousands of young Americans to attempt a ‘stache of their own. With typical self-deprecating charm, Della Valle reports that the Glorius Mustache Challenge website was, for “about twenty seconds”, the most-visited page on the Internet. All bashful boasting aside, the fact remains: Della Valle was able to defy the odds and cut through the clutter of contemporary culture and call attention to his music and his project. As a lesson in “indie” action, it’s an instructive and inspiring one.

And it’s one he’s likely to repeat with his latest single and its accompanying video. “Legs So Long It’s Crazy” has everything that makes Della Valle and his band so irresistibly entertaining – big riffs, butt-shaking beats, suggestive lyrics, sex appeal, a dash of sophistication coupled with a healthy helping of sleaze. It’s a cocktail that has been intoxicating East Coast audiences for a few years now; Jerseyans, in particular, know that Della Valle’s live sets are half classic pop concert, half house party, and completely delirious. Upon completion of their upcoming album – provocatively titled Taboo –Della Valle will be taking their sound to the rest of the nation. Until then, we’ve got “Legs So Long It’s Crazy”; a single release that gives new definition to the term “teaser”.

Della Valle is no stranger to the national circuit – the success of the Glorius Mustache documentary earned him permanent invitations to increasingly-popular “moustache events” all over the country. The latest “’Stache Bash” Tour, organized by the songwriter and conducted in April ‘09, took the Della Valle band from Burlington, Vermont to Nashville, Tennessee and everywhere in between. Della Valle promises fans that the “Legs So Long It’s Crazy” clip will be shown at all subsequent “’Stache Bashes”, and once you see it, we’re sure you’ll agree that it’s bound to be a highlight – and not just because of the singer’s hirsute upper lip. Directed by showbiz veteran Kelly Brower (whose credits include work on That ‘70s Show andSaturday Night Special), it’s a lurid tale, and the cinematic equivalent of a roundhouse right. Jay Della Valle plays a restless family man; he looks somewhat comfortable on the couch with his wife and kids, but his thoughts are on the scantily-clad and long-legged women in the S&M club. Before you know it, he’s chained to a gigantic red X, and a gorgeous, leather-wearing dominatrix is treating him to some rough affection. Animated sequences blur into live action, the footage keeps erupting into flames, and everybody wears outrageous (and frequently hilarious) costumes. The band even exercises some rudimentary choreography – spurred on, of course, by the red batons of the dancing girls.

We’re psyched to be working with Jay Della Valle to bring you this unapologetic, hot under the collar new clip. If you need more info, call Andy Gesner at 732-613-1779 or e-mail us at info@HIPVideoPromo.com. You can also visitwww.DellaValleMusic.com to find out more about Della Valle.