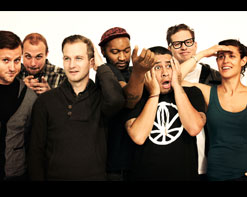 Andy Gesner and the HIP Video Promo staff here, encouraging you to go beyond your usual tastes of hip-hop music. A constant beat and rhythm is all it takes to make a rap video, but for the members of Doomtree, it’s all about collaboration. Ranging from a different series of creative styles, these talented musicians combine alternative rock elements to classic beats of rap and hip-hop. With raging energy, Doomtree excites and awakens the very best elements of alternative hip-hop music of today.

Based in Minneapolis, Minnesota, this “Midwest Hip-Hop Collective” brings forth various musical backgrounds. Almost entirely influenced by hip-hop music, Doomtree also blends punk rock elements with lyrical rhymes that initiate each emcee of the band to produce engaging music that provokes a positive attitude for the music listener. The seven members either perform solo or together, but as Doomtree they successfully collaborate to present their audience with a mixture of rock and hip-hop elements. The artists of Doomtree are highly active in the Twin Cities hip-hop community; at least one emcee is performing every three weeks. Every December, the entire band takes the stage for their annual “Doomtree Blowout.” Interestingly enough, in 2011 the “Doomtree Blowout” was extended to an entire weeklong series of performances. The energy that exists between each member of the band is amazing, and it is clear that each artist contributes his or her own take on music to make an extensive amount of innovative music.

In their newest video for “Bangarang,” we see a highly eccentric side of what Doomtree is all about. The playful atmosphere of a karaoke party at a friend’s house is abruptly interrupted by a self proclaimed “karaoke crasher”, played with masterful ease by renowned musical personality, and fellow Minneapolitan, Har Mar Superstar. The lyrics of the song masterfully create a message that speaks words beyond meaning; existing in the music scene, Doomtree explains how it’s hard to find artists who are true to themselves and their music careers. By stating that every beat sounds the same in today’s music world, Doomtree sticks out like sore thumbs in the best possible way. In case their rhymes are flowing a little too fast, you can follow along in the old-school karaoke style video scrolling throughout the video. That is, if you can take your eyes off of the generous flesh offerings of Har Mar.

It’s incredibly difficult to miss a collaborative group of musicians who so easily provoke intellectual thoughts about every day life. Although their song speaks about how artists aren’t trying hard to be different from one another, it also says a lot about human nature in general. To be different in this world isn’t difficult—it’s with the influence of musicians, such as Doomtree, that we can see the importance in staying true to one another and ourselves.

Listening to Doomtree excites a certain feeling of progress that must be taking place in our every day lives. Their music reminds us that we as people have a right to be different. We can choose to be anything we want, so why not join the likes of Doomtree and begin the search for difference in the world. Be sure to check out Doomtree when they come to your area on the No Kings Tour, and hit us up for copies of their new album, No Kings. For more information on Doomtree contact Andy Gesner at HIP Video Promo at (732)-613-1779 or email at info@HIPVideoPromo.com. You can also visit www.Doomtree.net to find out more about Doomtree.