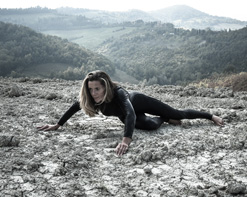 Florence Donovan, better known as Dos Floris, is a multi-instrumentalist whose genre-defying fusion of electronic and acoustic music is nothing short of revolutionary. Music has been a part of her life from a very young age, but it wasn’t until a struggle and recovery from ternage anorexia and panic that she was able to fully immerse herself in her career. In her new video “Silence”, from her self released debut album The Widowed Earth, she creates a visual experience that embraces the theme of relinquishing the past and embarking on a radical journey without looking back.

A life-changing move from the security of a normal 9 to 6 job (where on drunken nights out she would moan to anyone in listening distance that she really wanted to work in music) saw Dos Floris scrambling to find her place. After bouncing between bands and genres peaking at moderate success, she reached the final rung on her ladder of transformation when she made the decision to buckle down on being a solo artist. Her method was unconventional, but brimming with inspiration. In what she refers to as “Harry Potter style,” she spent 2 years under the staircase at home writing, producing, and recording what would become The Widowed Earth. The product of her unorthodox approach is an entrancing genre defying cinematic soundscape of an album. Huffington Post noted, “[her] pieces are as much sound sculptures as they are songs.”

“Silence” is a profound meditation on thoughts of self in conjunction with the physical world around us. The hypnotic sounds and soothing vocals tunnel the viewers’ vision directly into the inviting pastel color scheme of the video. Director Gilly Booth, along with cinematographers, Anthony Lucas and Jack Mealing, follow Dos Floris as she walks away from normalacy with no hesitation, on a path paved by her own deliverance. Her face is never shown as we trail behind her, giving the sense that she knows something we don’t know about what lies at the end of the journey. “Silence” shows us how truly awe-inspiring it is to see someone sublimely focused on their mission.

We are absolutely honored to be working with Dos Floris to bring the thought-provoking “Silence” video to your attention. Please let us know what you need from us to get this into your programming, and we’ll be sure to make it happen! Please contact Andy Gesner and the HIP Video Promo team at (732)-613-1779, email us at info@HIPVideoPromo.com or visit www.DosFloris.com for more info on Dos Floris.

For info about other Dos Floris music videos, click HERE