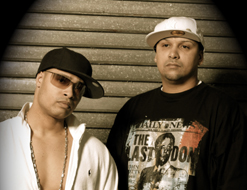 Hey, everybody, it’s Andy Gesner and the staff from HIP Video Promo, here to spread the word about a red-hot clip from a pair of provocative entertainers. The weather has changed, the sun is out, and we’re ready for something scalding — something to prepare us for the heat of summer. Lucky for us, DOSE has delivered with a video that can only be described as smoking: it starts out on fire, and only blazes brighter from there. The appropriately-named “Sexy” clip is decorated with footage of dazzling young women: some in bed, some walking provocatively from the shower, some dancing in the club, every one an eyeful. It’s a celebration of female fashion, a beauty show, and an opportunity for the two vocalists in DOSE to demonstrate their comfort around gorgeous women.

You might suspect that it’s all an act for the camera — nobody could be that familiar with so many model-looking girls, could they? Perhaps it is, and perhaps it isn’t. But it’s a safe bet that overDOSE, the duo’s debut album, will be getting plenty of attention from fans of all kinds. The DOSE set is a sparkling fusion of hip-hop soul, adventurous R&B, and Latin music; it’s sweet enough for the clubs, but tough enough for the streets. Produced by Lantz Mitchell (who has worked with SWV, D’Angelo, and Lil Kim, among others), overDOSE seems certain to establish the act as a major new urban voice.

In their East Harlem neighborhood, the two singers are already stars. “Sexy” has already received airplay on NYC’s 97.9 La Mega, the region’s (and perhaps the nation’s) premiere Latin music station. Bilingual and bi-cultural, the members of DOSE make records in English and in Español, and the debut album will be made available in both languages. The Spanish version of “Sexy” is a viral hit: the video was accessed on YouTube over 200,000 times during its first week on the site; since then, it’s received one half million plays. The New York Post recently named DOSE the best in new Latin music. And singers Phil NUTt and Sexy Cut have graced high-profile Manhattan stages, generating the same sort of heat in concert as they regularly do on record.

With their muscular physiques and stylish clothing, the DOSE singers look the part of hip-hop stars. In the “Sexy” video, they’re completely at ease — dancing with the girls, singing to them, or just reclining on the bed with them. The young women in the clip are stunning, and they know it: they tease the singers (and the camera), and leave every frame smoldering. One plays with a Polaroid camera, snapping shots of herself and scattering the results all over the mattress. Later, she and her friends will recline among the photographs; in one electrifying shot, the Polaroids are superimposed over an image of a gorgeous girl in bed. It’s hedonistic, voyeuristic, delightfully naughty: we’re not sure that we’re invited to look in on this party scene, but there’s no chance we’ll be able to tear our eyes away.

It’s very cool for us to have the opportunity to work with the crew at Liquidwet Entertainment to bring you this sizzling new clip. If you need more info, call Andy Gesner at 732-613-1779 or e-mail us at info@HIPVideoPromo.com.