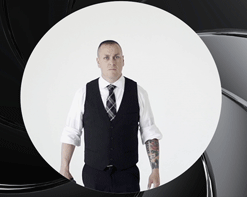 Canadian artist Doug Crawford combines hip-hip, R&B, pop, and dubstep in his creative and edgy music. With contemporary influences revolving around artists such as Eminem, 50 cent, Dr Dre, and Drake, Crawford’s music is on the rise in the music scene. HIP Video Promo is excited to introduce his astounding music video clip for “The One & Only.”

This self-made hip-hop artist has been producing and successfully marketing his music to fans for over a decade. As one half of the Kelowna-based rap duo Secret Society, he released three albums that collectively sold over 10,000 copies with no formal distribution, and garnered a VideoFACT grant for their single “Lakeshore Craze,” which resulted in a music video that received regular rotation on MuchMusic’s RapCity program.

After a decade of developing his craft as part of a group, Doug has now launched his career as a solo artist with the release of his debut solo album One Day At A Time. Doug has toured relentlessly across North America, and has opened for numerous internationally recognized names such as Snoop Dogg, Ice Cube, Ludacris, and The Game amongst many others. He has performed at festivals such as Kelowna’s Summer Jam and Edmonton’s Canada Day celebration, and his new album Perseverance has just recently been released via the digital distribution arm of Interscope Records.

Director Stuey Kubrick ignites the fire that has been stewing beneath Doug Crawford’s musical career in “The One & Only.” With tantalizing scenes that leave you mystified, we follow Doug as he experiences revelations and epiphanies. Watching him run from the confines of being held captive leaves the audience on the edge of their seats! There’s no way to deny “The One & Only” and with a smart spin on contemporary hip-hop, the song itself justifies Crawford’s emergence on the music scene. This clip is a must-see!

With racy scenes that are full of energy and anticipation, “The One & Only” is this year’s most noteworthy video clips. For more information, please contact Andy Gesner and the HIP Video Promo staff at (732)-613-1779 or email us at info@HIPVideoPromo.com .