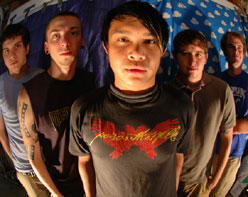 Hello to all my friends in the music video community! It’s Andy Gesner and the staff at HIP Video Promo with another hard rocking band you should know lots more about! We’ve always counted on the Greater Washington area for the latest and best in post-hardcore: emo was born there, and the DC music scene is both legendary and massively influential. The members of Downtown Singapore might be from suburban Waldorf, Maryland, but they know their spiritual home lies across the Potomac.They’re the freshest faces from the Capital district, and they proudly follow in the footsteps of early Jawbox and Rites Of Spring. But make no mistake about it: while Downtown Singapore echoes the glories of DC punk history, the quintet has a sound and passion that is entirely its own.

Begin with singer Jeremiah Scott, a powerhouse vocalist with catchy inflections, a healthy sense of personal outrage, and a knack for writing lyrics of uncommon emotional focus. Drummer Matthew Thorson and bassist Josh Louge set the ground shaking, yet somehow Scott never loses his balance. The twin guitar attack of Matthew Van Gasbeck and Jacob Rabadi swings through these songs like a broadsword — slashing, jabbing, punctuating with force. Yet despite their seriousness, and their fidelity to the tenets of DC area punk, Downtown Singapore is not so poker-faced that they’re above an inspired Eighties cover: they close Understanding A Guarantee by coaxing the over-the-top emo spirit out of Cyndi Lauper’s “Time After Time”.

The single-minded intensity and the fervor of the performances of Understanding A Guarantee have made Downtown Singapore a local favorite. This August, the young band played the DC date of the Warped Tour, and they’ve become fixtures on the Capital club circuit. “Velvet Divorce”, the lead single, is an uncompromising slice of guitar rock, relentless, honest, and forthright. Scott sounds desperate throughout, his voice acrobatic, twisting his vowels and bellowing where necessary – but, keeping things tuneful, he resists the temptation to scream. It’s easy to hear why PunkNews praised his “young and honest voice”.

Director Tyler Lambert is perfectly positioned to capture Downtown Singapore’s visual aesthetic – not only is the Bantam City bassist part of the same DC-area rock underground as the Waldorf quintet, but he co-designed the cover of Understanding A Guarantee. Lambert’s straightforward clip for “Velvet Divorce” finds the band playing furiously in an attic practice studio. The equipment-strewn room seems too tight to contain the group’s youthful energy – the band members bounce around like agitated atoms. Scott addresses the microphone with eyes shut, squeezing out his desperate story of misdirection and shouting his requests for clarity to the low ceiling.

Periodically, Lambert cuts away from the live performance to find Pete Voelker, longtime friend of the band, on the streets and red brick sidewalks of Washington under bright sunlight. Voelker quite literally wears the chorus of “Velvet Divorce” on his chest, switching between shirts bearing a word from the song. He emerges from the Metro and begins to run. Jostled by pedestrians, he gets food spilled on his clothing. At times, he appears to be fleeing; at other moments, we’re almost certain he is chasing something. Finally he comes to rest at the riverside. For a long moment, the camera lingers there, capturing a breathless Voelker deep in thought, peering out at the water that flows like an unanswered question.

We are thrilled to be working with Burton Gray and the whole gang at DCide Records to bring you this terrific clip. Downtown Singapore will be on the upcoming Punk The Clock tour, and would love to do video interviews or video IDs. Please let us know if you would be interested in checking out this band live! Let us know as soon as you can seeing this highly anticipated tour will be selling out coast to coast. We will also have plenty of copies of Understanding A Guarantee for on-air giveaways. If you need more info, call Andy Gesner at 732-613-1779 or e-mail us at info@HIPVideoPromo.com.