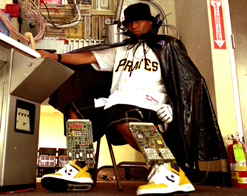 Hello and welcome to the beginning of the summer! It’s Andy Gesner and the staff from HIP Video Promo with another outstanding clip for your viewing enjoyment! When we send you a new video, we usually like to contextualize the artist by comparing him to his contemporaries. But is there a figure in the history of hip-hop who comes within a thousand miles of Kool Keith? Prince Paul shares some of his art-damaged loopiness and incisive satirical intelligence, but he’s almost never on the mic. The Pharcyde were trippy at times, but their most acid-drenched ruminations were child’s play compared to Keith’s legendary extraterrestrial departures. And MF Doom and Madlib have rhymed over some crazy tracks, but they’ve never balanced on the lip of the kind of sonic insanity that Keith and his producers cook up as a matter of course. No, it’s fair to call Keith (and his many alter-egos) the most adventurous figure in the history of the genre. And he’s never quite as bold or crazy as he is when he’s recording as the notorious Dr. Octagon.

Before taking up the Dr. Octagon character, Keith had been the lead voice in the Ultramagnetic MCs, whose 1988 release Critical Beatdown is considered a classic and a seminal influence on the progressive-edged rap underground. But nothing could have prepared the hip-hop universe for the Doctor’s first house call – the deranged “Earth People” and the landmark Dr. Octagonecologyst album. Never had a rapper slipped away so far from the bonds of gravity, nor had one combined genuine philosophical reflections and deliciously potty-mouthed jokes with such seamlessness. Dr. Octagonecologyst established Kool Keith and Dr. Octagon as leading lights of the mid-Nineties alt-rap revolution, and helped launch the careers of Dan “The Automator” Nakamura and DJ Shadow. Its influence on leftfield, adventurous hip-hop can’t be overstated.

Since recording as Dr. Octagon, Keith has tried on different hats and different conceptual frameworks: the threatening Dr. Dooom, Mr. Gerbik, the outrageous (and self-explanatory) Black Elvis, the insane Mr. Nogatco. In a purely operatic move, Dooom even rubs out Dr. Octagon during the intro to First Come, First Served. But after years of false sightings, Dr. Octagon is back – and as “Aliens” proves, he’s just as wigged-out as ever. Recorded in a twelfth-century castle in Germany, “Aliens” is classic Kool Keith: a fractured sci-fi narrative, metaphors piled up like a twenty-car collision, and some of the most mindbending emceeing and beatmaking imaginable. Here, Dr. Octagon actually slows down and speeds up the backbeat, and never misses a stitch. And when was the last time you heard a rap song with a piano break, analog synth punctuation, a horn solo, and a bout of big-league turntablism?

The clip for “Aliens” takes Dr. Octagon’s lo-budget sci-fi motifs to their logical conclusion. Nearly everybody in the video is wearing a mask, or a tinfoil-covered box, or a space suit. They duck out of chimneys, and hang out on tenement stairs; they’re partially submerged in tubs filled with water, they dance in front of gigantic model rockets. These images flash by in rapid, jumbled sequence; they roll forward, backward, freeze, and disappear before we can get a clear sense of what we’re watching. In between these images of the forgotten future, director Veith Michel throws even crazier footage: a luxury car next to two gigantic fingers, a walking, gleaming brick supported by a pair of shapely female legs. Moreover, the rapper has some messages for us – written in grainy block text and superimposed over the shots. “You have been abducted”, reads one of the stills, and it certainly seems true: but do the “aliens” have our bodies, or has Keith just managed to warp our brains beyond recognition?

Here at HIP, we are very excited to be working with Andrew Nelson and all of the good folks at World’s Fair Label Group. They have hooked us up with plenty of copies of The Return of Dr. Octagon that we will have available for all of your giveaway needs. If you need more info, call Andy Gesner at 732-613-1779 or e-mail us at info@HIPVideoPromo.com.